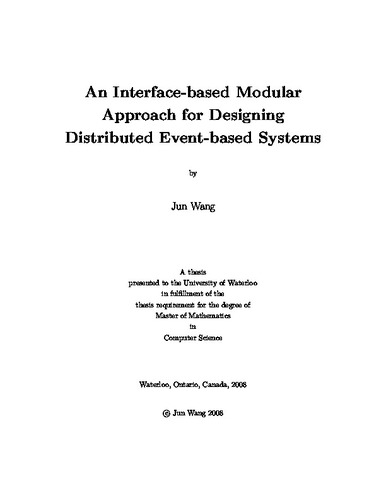 A Distributed Event-based System (DEBS) exhibits its desired behavior through its functional components collaborating with each other via event exchanging. Due to loose-coupling and flexibility, DEBS applications have become increasingly popular. Indeed, such systems are expected to appear in various application domains such as large-scale Internet applications and ubiquitous computing. Notwithstanding their popularity, current DEBS applications are still often developed in an informal process and are not modularized. On the individual event level, current DEBS developers can define what events a component can accept and publish, and, by registering event handlers, what action an event can trigger. Currently, developers lack structuring mechanisms for representing event interactions and dependencies in a modular way. While current research has made fruitful contributions to various aspects in the DEBS paradigm, such as, event delivery, event detection and composition, event visibility, its emphasis is on the individual event level. In this thesis, we advocate that by designing a new DEBS metamodel with extended behavioral interfaces and high-level structure mechanisms, we can (1) define an interface-based modular approach to model and design DEBS applications, (2) implement a prototype framework on a P2P network that provides built-in support to our proposed interface-based DEBS development, and (3) provide case studies illustrating the interface-based development process and the applicability of our proposed approach.