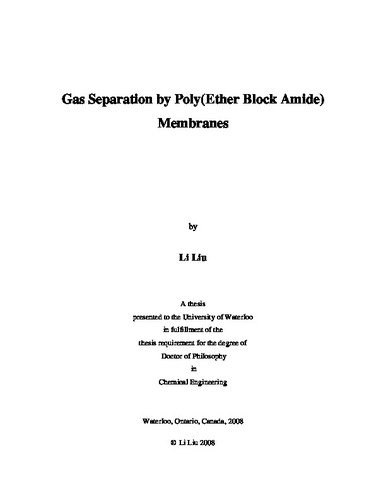 This study deals with poly(ether block amide) (PEBA) (type 2533) membranes for gas separation. A new method was developed to prepare flat thin film PEBA membranes by spontaneous spreading of a solution of the block copolymer on water surface. The membrane formation is featured with simultaneous solvent evaporation and solvent exchange with the support liquid, i.e. water. The formation of a uniform and defect-free membrane was affected by the solvent system, polymer concentration in the casting solution and temperature. Propylene separation from nitrogen, which is relevant to the recovery of propylene from the de-gassing off-gas during polypropylene manufacturing, was carried out using flat PEBA composite membranes formed by laminating the aforementioned PEBA on a microporous substrate. The propylene permeance was affected by the presence of nitrogen, and vice versa, due to interactions between the permeating components. Semi-empirical correlations were developed to relate the permeance of a component in the mixture to the pressures and compositions of the gas on both sides of the membrane, and the separation performance at different operating conditions was analyzed in terms of product purity, recovery and productivity on the basis of a cross flow model. To further understand gas permeation behavior and transport mechanism in the membranes, sorption, diffusion, and permeation of three olefins (i.e., C2H4, C3H6, and C4H8) in dense PEBA membranes were investigated. The relative contribution of solubility and diffusivity to the preferential permeability of olefins over nitrogen was elucidated. It was revealed that the favorable olefin/nitrogen permselectivity was primarily attributed to the solubility selectivity, whereas the diffusivity selectivity may affect the permselectivity negatively or positively, depending on the operating temperature and pressure. At a given temperature, the pressure dependence of solubility and permeability could be described empirically by an exponential function. The limiting solubility at infinite dilution was correlated with the reduced temperature of the permeant. The separation of volatile organic compounds (VOCs), which are more condensable than olefin gases, from nitrogen stream by the thin film PEBA composite membranes for potential use in gasoline or other organic vapour emission control was also studied. The membranes exhibited good separation performance for both binary VOC/N2 and multi-component VOCs/N2 gas mixtures. The permeance of N2 in the VOC/N2 mixtures was shown to be higher than pure N2 permeance due to membrane swelling induced by the VOCs dissolved in the membrane. The effects of feed VOC concentration, temperature, stage cut, and permeate pressure on the separation performance were investigated. Additionally, hollow fiber PEBA/polysulfone composite membranes were prepared by the dip coating technique. The effects of parameters involved in the procedure of polysulfone hollow fiber spinning and PEBA layer deposition on the permselectivity of the resulting composite membranes were investigated. Lab scale PEBA hollow fiber membrane modules were assembled and tested for CO2/N2 separation with various flow configurations using a simulated flue gas (15.3% carbon dioxide, balance N2) as the feed. The shell side feed with counter-current flow was shown to perform better than other configurations over a wide range of stage cuts in terms of product purity, recovery and productivity.