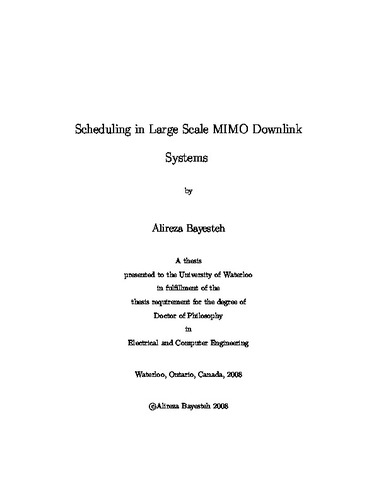 This dissertation deals with the problem of scheduling in wireless MIMO (Multiple-Input Multiple-Output) downlink systems. The focus is on the large-scale systems when the number of subscribers is large. In part one, the problem of user selection in MIMO Broadcast channel is studied. An efficient user selection algorithm is proposed and is shown to achieve the sum-rate capacity of the system asymptotically (in terms of the number of users), while requiring (i)~low-complexity precoding scheme of zero-forcing beam-forming at the base station, (ii)~low amount of feedback from the users to the base station, (iii)~low complexity of search. Part two studies the problem of MIMO broadcast channel with partial Channel State Information (CSI) at the transmitter. The necessary and sufficient conditions for the amount of CSI at the transmitter (which is provided to via feedback links from the receivers) in order to achieve the sum-rate capacity of the system are derived. The analysis is performed in various singnal to noise ratio regimes. In part three, the problem of sum-rate maximization in a broadcast channel with large number of users, when each user has a stringent delay constraint, is studied. In this part, a new definition of fairness, called short-term fairness is introduced. A scheduling algorithm is proposed that achieves: (i) Maximum sum-rate throughput and (ii) Maximum short-term fairness of the system, simultaneously, while satisfying the delay constraint for each individual user with probability one. In part four, the sum-rate capacity of MIMO broadcast channel, when the channels are Rician fading, is derived in various scenarios in terms of the value of the Rician factor and the distribution of the specular components of the channel.