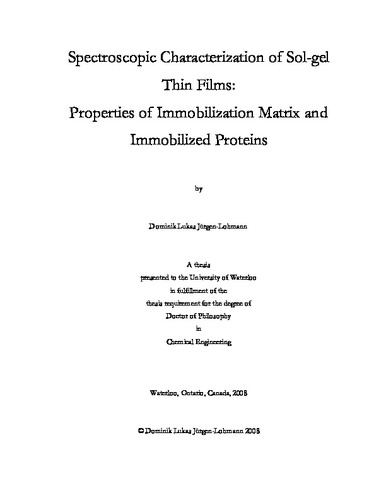 Although enzymes show great potential for use in industrial applications, their implementation from a practical perspective is still somewhat limited by various shortcomings in the area of enzyme immobilization. The use of silica sol-gels for protein entrapment has been studied extensively over the past 15 years or so. However, our understanding of the interactions between the immobilization matrix and the entrapped biomolecules is still relatively poor. Non-invasive in situ spectroscopic characterization is a promising approach to gain a better understanding of the fundamentals governing sol-gel immobilization. This thesis describes the application of Fourier transform infrared (FTIR) microscopy, two dimensional (2D) FTIR and fluorescence spectroscopy to characterize the immobilization matrix, entrapped model proteins and their interactions. Hydroperoxide lyase (HPL [E.C. 4.1.2.]) was chosen as a potential model protein for sol-gel entrapment. HPL activity was evaluated by use of factorial experimental design investigating the effects of KCl and Triton X-100 on HPL activity with 13-hydroperoxy-octadecadienoic acid (LA-OOH) and the novel water soluble 13-hydroperoxy-octadienoyl sulfate (LS-OOH) as substrates. The highest HPL activity was achieved under aqueous conditions with high salt and low surfactant concentrations and LA-OOH as the substrate. A significant interaction between salt and surfactant as well as salt and substrate was identified and a hypothesis to explain the basis of the interaction phenomena is presented. To analyze sol-gels with spectroscopic techniques, a sample format amenable to these techniques was needed. Therefore, a spin-coating technique for the preparation of aluminum or glass supported sol-gel thin films containing immobilized protein and a varying degree of the organically modified precursor propyltrimethoxysilane (PTMS) was developed. This approach produced samples that were suitable for chemical mapping using FTIR microscopy or fluorescence spectroscopic investigations. A data analysis method was developed to extract information on chemical speciation and distribution from FTIR data matrices obtained through FTIR microscopy. Results indicate that sol-gel thin films are not homogeneous on the microscopic level. Instead, they are heterogeneous with a clustering in the distribution of the model proteins studied (lysozyme [E.C. 3.2.1.17], lipase [E.C. 3.1.1.3] and bovine serum albumin (BSA)) at the scale investigated. The appearance of these clusters was found to depend on the type of protein entrapped, as well in some cases on the composition of the sol-gel. Moreover, the PTMS distribution was positively correlated with the protein distribution in the case of lipase and negatively correlated in the case of lysozyme and BSA. Additionally, sol-gels with a higher PTMS content appeared to conserve protein structure in areas where lipase clustered. Lysozyme and BSA, on the other hand, seemed to retain their structures in high concentration clusters better at lower PTMS content. A hypothesis taking into account the surface hydrophobicity of the proteins and the sol-gel composition as the basis for these phenomena is proposed. Fluorescence spectroscopy revealed that the PTMS content of the sol-gels had a direct effect on the physical properties of the immobilized proteins as evidenced by a blue shift of the intrinsic tryptophan (TRP) fluorescence. Temperature-dependent fluorescence spectroscopy revealed that the amount of TRP quenching was inversely proportional to the PTMS content of the sol-gel, suggesting that there were varying amounts of water available for quenching for the different immobilized enzyme systems. Analysis of the sol-gels by 2D FTIR spectroscopy with a focus on the amide A region using Gaussian peak deconvolution revealed two different species of water for the 50 % PTMS thin film sol-gels with BSA that could be described as fully and not fully H-bonded. It was also found that these species of water showed different removal profiles during thermal treatment. 2D FTIR of the amide I region followed by absorbance difference spectrum evaluation revealed that the temperature stability of the three model proteins was also sol-gel composition dependent. A hypothesis that the surface characteristics of the proteins determine the nature of the composition dependence is presented.