Aspects of Polymer Chain Dynamics in Solution Studied by Fluorescence 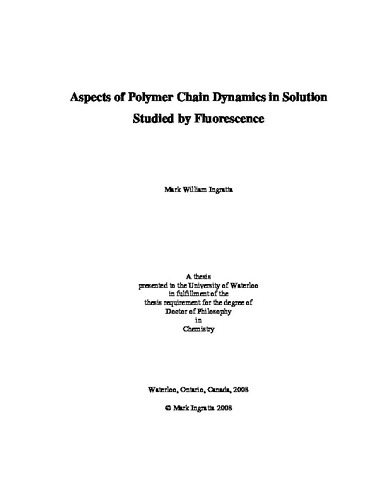 Several pyrene-labeled polymers and polypeptides were synthesized and their chain dynamics were characterized using steady-state and time-resolved fluorescence techniques. Firstly, four series of pyrene-labeled polystyrenes (Py-PS) were synthesized to determine the effect that the method used for pyrene attachment, the linker connecting pyrene to the backbone, and the distribution of pyrene along the backbone all have on excimer formation. It was found that the amount of excimer formed was different in each case. The differences were described by utilizing the fluorescence blob model (FBM) analysis of the time-resolved monomer and excimer fluorescence decays. Secondly, two Py-PS series were studied in several different solvents with viscosities ranging from 0.36 to 1.19 mPa.s to demonstrate the effect of viscosity on the FBM parameters. The rate constant for excimer formation within a blob, kblob, was found to remain constant with viscosity while the number of monomer units per blob, Nblob, increased with decreasing viscosity. Thirdly, in a technical note, the inherent analogy existing between the aggregation number of surfactant micelles, Nagg, and Nblob, is taken advantage of to establish a “model-free” procedure to determine Nblob. This procedure was validated through the analysis of the time-resolved fluorescence decays of five different pyrene-labeled polymers in seven different solvents. Fourthly, the side-chain dynamics of alpha-helical pyrene-labeled poly(glutamic acid) were investigated. A longer linker connecting pyrene to the backbone resulted in an increase in Nblob which agreed quantitatively with predictions made by molecular modeling. Decreasing the lifetime of the excited pyrene from 215 ns to 50 ns with a quencher increased kblob significantly, while Nblob decreased slightly. Finally, the backbone dynamics of pyrene-labeled poly(aspartic acid) (Py-PAA) were investigated and quantified using the FBM. It was determined that excimer formation was controlled by the very rigid polypeptide backbone and not by the solvent viscosity, contrary to previous results obtained with other pyrene-labeled vinyl polymers.