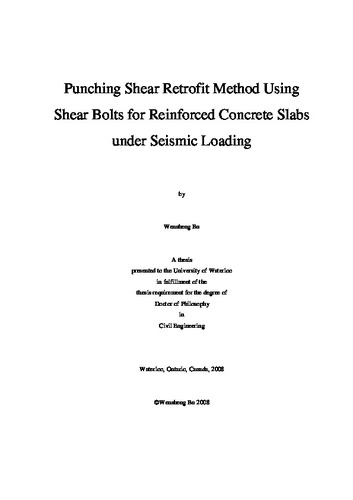 Reinforced concrete slab-column structures are widely used because of their practicality. However, this type of structures can be subject to punching-shear failure in the slab-column connections. Without shear reinforcement, the slab-column connection can undergo brittle punching failure, especially when the structure is subject to lateral loading in seismic zones. The shear bolts are a new type of transverse reinforcement developed for retrofit of existing structures against punching. This research focuses on how the shear bolts can improve the punching-shear capacity and ductility of the existing slab-column connections under vertical service and lateral seismic loads. A set of nine full-scale reinforced concrete slab-column connection specimens were tested under vertical service and cyclic loads. The vertical (gravity) load for each specimen was kept at a constant value throughout the testing. The cyclic lateral drift with increasing intensity was applied to the columns. The specimens were different in number of bolts, concrete strength, number of openings, and level of gravity punching load. Strains in flexural rebars in the slabs, crack widths, lateral loads, and displacements were obtained. The peak lateral load (moment) and its corresponding drift ratio, connection stiffness, crack width, and ductility were compared among different specimens. The testing results show that shear bolts can increase lateral peak load resisting capacity, lateral drift capacity at peak load, and ductility of the slab-column connections. Shear bolts also change the failure mode of the slab-column connections and increase the energy dissipation capacity. The thesis includes also research on the development of guidelines for shear bolt design for concrete slab retrofitting, including the punching shear design method of concrete slab (with shear bolts), dimensions of bolts, spacing, and influence of bolt layout patterns. Suggestions are given for construction of retrofitting method using shear bolts. Recommendations are also presented for future research.