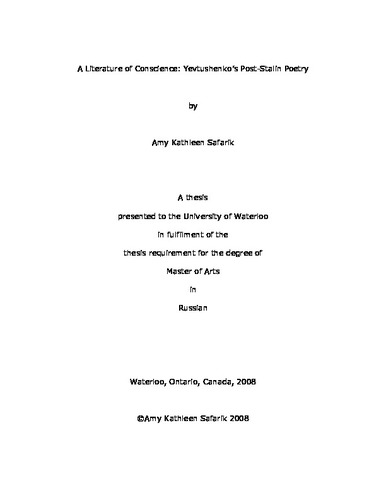 The tradition of civic poetry occupies a unique place in the history of Russian literature. The civic poet (grazhdanskii poet) characteristically addresses socio-political issues and injustices relevant to the era in opposition to the established authority. This often comes out of a sense of responsibility to the nation. During the Thaw period (1953-63), an interval of relative artistic freedom that followed decades of severe artistic control, Y. Yevtushenko (1932- ) was among the first poets who dared to speak critically about the social and political injustices that occurred during Stalin’s dictatorship. At that time, his civic-oriented poetry focused primarily on the reassessment of historical, social, and political values in the post-Stalin era. The aim of the present study is to evaluate Yevtushenko’s position within the tradition of civic poets and to illustrate his stylistic ability to combine lyrical intimacy and autobiographic experiences with national and international issues in the genre of civic poetry. I approach the subject using a methodology of close examination: a formal and structural analysis of select poems in the original Russian. In addition, relevant social, political, and historical conditions are taken into account, as well as Mayakovsky’s influence on Yevtushenko’s poetry. This research offers a definition of the term “civic poet” and supplies a historical survey of civic poetry that dates back to the satires of the eighteenth century. I specifically refer to the Russian icons of this genre: G. Derzhavin, A. Pushkin, K. Ryleev, M. Lermontov, N. Nekrasov, and V. Mayakovsky. I start my evaluation of Yevtushenko as a civic poet by examining his narrative poem, Stantsiia Zima (1956), and proceed with a detailed analysis of his most important political poems of the Thaw period: “Babii Yar” (1961) and “Nasledniki Stalina” (Heirs of Stalin, 1962). In addition, I assess Yevtushenko’s political and cultural acts throughout his career. Finally, I further analyze select poems by Yevtushenko that were published from 1990 to 2005, to offer a new and more complete view of Yevtushenko’s place in the canon of Russian civic poets.