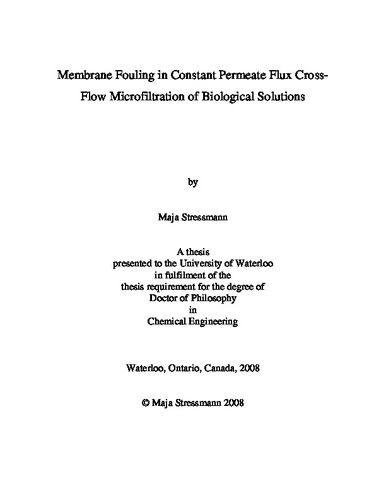 This thesis investigates the fouling of a microfiltration membrane by biological solutions. Membrane fouling is recognized as a major drawback for the application of microfiltration in the purification of biotechnology products. Membrane fouling was analyzed and compared for filtrations performed with a hollow fiber microfiltration module operated at constant permeate flux using bovine serum albumin (BSA) solutions or Chinese hamster ovary (CHO) cell culture broths as feed solutions. A mechanistic model was developed to represent the fouling of a cross-flow microfiltration membrane operated at constant permeate flux. Fouling was observed as an increase in the transmembrane pressure (TMP) and assumed to occur first by pore blockage followed by cake formation over the blocked pores. The effect of the cross-flow action was described by the removal of deposits from the membrane surface thereby reducing the pore blockage and the mass of the cake. The model was fitted to the TMP profiles obtained during the filtration of BSA solutions and Chinese hamster ovary (CHO) cell culture broths with a 0.45 µm polysulfone hollow fiber membrane. According to the fitted model, pores blocked faster and more cake was formed with increasing BSA concentration. In the case of CHO cell culture broth, increasing the wall shear rate (proportional to cross-flow velocity) seemed to lead to the formation of a less pronounced cake but more pore blockage. The cross-flow mechanistic model was applied to the microfiltration of CHO cell culture supernatants harvested at different days of the fermentation process. The filtrations were performed at two different shear rates and with two different membrane pore sizes. The cell culture supernatant caused membrane fouling observed as an increase in both the TMP and the membrane hydraulic resistance estimated from water flux measurements at the end of the filtrations. The highest TMP increase was observed for the filtrations with the smaller membrane pore size (0.2 µm) and the higher shear rate (8000 s-1). The hydraulic resistance estimates of the fouled membrane also revealed a higher irreversible fouling for the smaller (0.2 µm) membrane pore size while the model analysis indicates that more fouling occurred at the entrance of the membrane pores. The shear rate was found to strongly influence the contribution of the reversible fouling to the total hydraulic resistance of the membrane. The cross-flow mechanistic model indicates a higher pore blockage for the most severe membrane fouling observed experimentally for the smaller membrane pore size and the higher shear rate. At the same time, a smaller cake deposit was predicted for the higher shear rate. The different cell culture harvest time investigated in this study did not reveal any differences in membrane fouling. BSA solutions were used to evaluate the contribution of BSA aggregates, fresh cell culture medium and the non-ionic surfactant Pluronic F-68 to membrane fouling. A simple empirical model was developed to represent the TMP increase and to derive the initial fouling rate. The initial fouling rate, the normalized TMP and the irreversible membrane resistance at the end of the filtration were analyzed to determine the effect of BSA solution characteristics on membrane fouling. The initial fouling rate increased with increasing BSA aggregate content consistent with a two-step fouling mechanism that was proposed for membrane fouling by BSA. Increased BSA concentration and the use of fresh cell culture medium compared to potassium phosphate buffer resulted in an increase in initial fouling rate, TMP and irreversible membrane fouling. The addition of the non-ionic surfactant Pluronic-F68 to the BSA solutions decreased the long-term fouling and the irreversible fouling but did not affect the initial fouling rate.