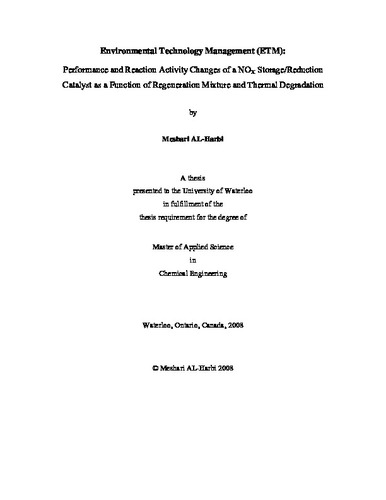 With steadily increasing emissions regulations being imposed by government agencies, automobile manufacturers have been developing technologies to mitigate NOX emissions. Furthermore, there has been increasing focus on CO2 emissions. An effective approach for CO2 reduction is using lean burn engines, such as the diesel engine. An inherent problem with lean-burn engine operation is that NOX needs to be reduced to N2, but there is an excess of O2 present. NOX storage and reduction (NSR) is a promising technology to address this problem. This technology operates in two phases; where in the lean phase, normal engine operation, NOX species are stored as nitrates, and in a reductant rich phase, relative to O2, the NOx storage components are cleaned and the NOX species reduced to N2. In this study, the effects of reductant type, specifically CO and/or H2, and their amounts as a function of temperature on the trapping and reduction of NOX over a commercial NSR catalyst have been evaluated. Overall, the performance of the catalyst improved with each incremental increase in H2 concentration. CO was found ineffective at 200°C due to precious metal site poisoning. The addition of the H2 to CO-containing mixtures resulted in improved performance at 200°C, but the presence of the CO still resulted in decreased performance in comparison to activity when just H2 was used. At 300-500°C, H2, CO, and mixtures of the two were comparable for trapping and reduction of NOX, although the mixtures led to slightly improved performance. Although NSR technology is very efficient in reducing NOX emissions, a significant challenge that questions their long-term durability is poisoning by sulfur compounds inherently present in the exhaust. Therefore, during operation, NSR catalysts require an intermittent high-temperature exposure to a reducing environment to purge the sulfur compounds from the catalyst. This desulfation protocol ultimately results in thermal degradation of the catalyst. As a second phase of this study, the effect of thermal degradation on the performance of NSR technology was evaluated. The catalyst performance between a 200 to 500°C temperature range, using H2, CO, and a mixture of both H2 and CO as reductants was tested before and after different high-temperature aging steps. Tests included water-gas shift (WGS) reaction extent, NO oxidation, NOX storage capacity, oxygen storage capacity (OSC), and NOX reduction efficiency during cycling. The WGS reaction extent was affected by thermal degradation, but only at low temperature. NO oxidation did not show a consistent trend as a function of thermal degradation. The total NOX storage capacity was tested at 200, 350 and 500°C. Little change was observed at 500°C with thermal degradation and a steady decrease was observed at 350°C. At 200°C, there was also a steady decrease of NOX storage capacity, except after aging at 700°C, where the capacity increased. There was also a steady decrease in oxygen storage capacity at test temperatures between 200 and 500°C after each increase in thermal degradation temperature, except again when the sample was degraded at 700°C, where an increase was observed. In the cycling experiments, a gradual drop in NOX conversion was observed after each thermal degradation temperature, but when the catalyst was aged at 700°C, an increase in NOX conversion was observed. These data suggest that there was redispersion of a trapping material component during the 700°C thermal degradation treatment while the oxygen storage capacity data indicate redispersion of oxygen storage components. It therefore seems likely that it is these oxygen storage components that are becoming ‘‘activated’’ as trapping materials at low temperature.