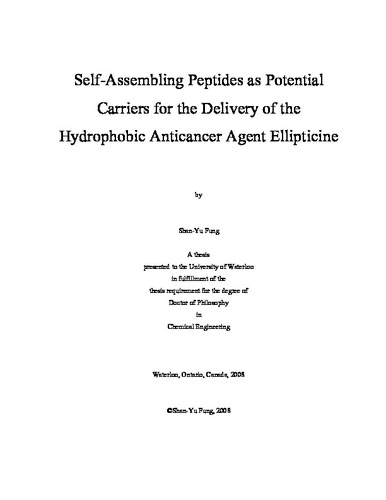 Self-assembling peptides have emerged as new nanobiomaterials in the areas of nanoscience and biomedical engineering. In this category are self-assembling, ionic-complementary peptides, which contain a repeating charge distribution and alternating hydrophobic and hydrophilic residues in the amino acid sequence, leading to a unique combination of amphiphilicity and ionic complementarity. These peptides can self-assemble into stable nanostructures or macroscopic membranes that can withstand conditions of high temperature, extreme pH, many digesting enzymes and denaturation agents. Moreover, they exhibit good biocompatibility with various cultured mammalian cells, and do not have detectable immune responses when introduced into animals. These properties make them ideal materials for tissue scaffolding, regenerative medicine and drug delivery. This thesis focuses on the utilization of self-assembling peptides for hydrophobic anticancer drug delivery. The hydrophobic anticancer agent ellipticine was selected as a model drug. The studies include: (i) characterization of the photophysical properties of ellipticine in different environments; (ii) study of the formation of peptide-ellipticine complexes and the release kinetics; (iii) investigation of the cellular toxicity of the complexes and ellipticine uptake; (iv) study of the peptide sequence effect on the complex formation and in vitro delivery. Prior to applying ellipticine to the peptide-based delivery system, the fundamental studies on the effect of solution conditions, especially solvent polarity and hydrogen bonding, on the fluorescence of ellipticine were carried out. Ultraviolet (UV) absorption and fluorescence emission of ellipticine were found to be solvent/environment dependent. The absorption and emission maxima shifted to higher wavelengths (red shift) with increased solvent polarity. Large Stokes’ shifts were due to intramolecular charge transfer (ICT), which was enabled by large solvent polarity and hydrogen bonding of ellipticine with the solvents. The photophysical response of ellipticine to changes in solvent polarity and hydrogen bond formation could be used to infer the location of ellipticine in a heterogeneous medium, such as liposomes and cultured cells. EAK16-II, a model self-assembling peptide, was found to be able to stabilize ellipticine in aqueous solution. The equilibration time required to form peptide-ellipticine complex suspensions was found to be peptide concentration-dependent and related to the peptide critical aggregation concentration (CAC, ~0.1 mg/mL). With different combinations of EAK16-II and ellipticine concentrations, two molecular states (protonated or crystalline) of ellipticine could be obtained in the complexes. The release kinetics of ellipticine from the complex into egg phosphatidylcholine (EPC) vesicles (cell membrane mimics) was also affected by the peptide concentration used in the drug formulation. A higher peptide concentration resulted in a faster transfer rate, in relation to the size of the resulting complexes. Subsequent cellular studies on two cancer cell lines, A549 and MCF-7, showed that the complexes with protonated ellipticine were more effective against both cell lines, but their dilutions were not very stable. In addition, it was found that ellipticine uptake in both cell lines was very fast and through direct membrane permeation. Three peptides, EAK16-II, EAK16-IV and EFK16-II, either having a different charge distribution (EAK16-II vs. EAK16-IV) or hydrophobicity (EAK16-II vs. EFK16-II), were tested for the complexation and in vitro delivery of ellipticine. It was found that EAK16-II and EAK16-IV were able to stabilize protonated or crystalline ellipticine depending on the peptide concentration; EFK16-II, on the other hand, could stabilize neutral ellipticine molecules and ellipticine (micro)crystals. The viability results showed that the charge distribution of the peptides seemed not to affect the complex formation and its therapeutic efficacy in vitro; however, the increase in hydrophobicity of the peptides significantly altered the states of stabilized ellipticine and increased the stability of the complexes. This work provides essential information for peptide sequence design in the development of self-assembling peptide-based delivery of hydrophobic anticancer drugs.