The ecology of the nuisance macroalga, Cladophora glomerata, and its resurgence in Lake Ontario 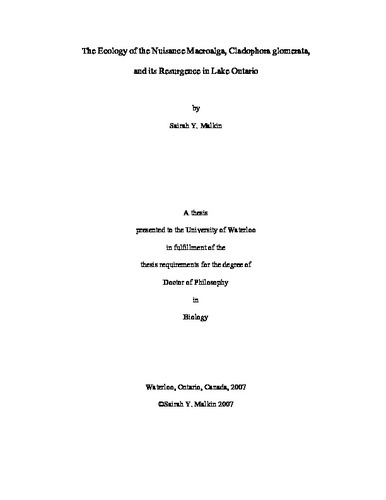 Cladophora glomerata is the dominant spring and summer epilithic macroalga in the lower Laurentian Great Lakes, and was a notorious nuisance prior to nutrient management of the early 1970s. It is an indicator of excessive nutrient supply and appears to be experiencing a resurgence in the nearshore of the lower Great Lakes. This thesis examines the ecology of C. glomerata in an urbanized location of Lake Ontario and addresses decadal scale environmental changes to the lake and their impact on this macroalga. A Cladophora growth model (CGM) was calibrated and validated to simulate attached and sloughed Cladophora biomass using two years of collected input data and independent measurements of Cladophora biomass. The CGM was used to hindcast Cladophora growth using multiplicative factors of seasonal minimal tissue phosphorus concentrations (QP) and seasonal mean nearshore light attenuation (KdPAR) of the early 1970s and 1980s relative to contemporary data. Cladophora QP in Lake Ontario is currently lower than in the early 1980s, resulting in reduced Cladophora biomass at all depths in the euphotic zone. KdPAR has also declined, most strongly since the mid-1990s, following Dreissena mussel invasion, driving an increase in macroalgal biomass between 3.5 and 10 m depth. Combining these effects, the CGM predicted that biomass is currently lower in Lake Ontario than in the early 1980s. However, increases in QP in this post-dreissenid mussel period are predicted to result in greater Cladophora proliferation than in previous decades due to increased nearshore water clarity. The in situ rates of primary production on Cladophora-dominated rocky substrata at 1m depth were measured through the spring and summer. Net primary production (NPP) was measured as change in dissolved inorganic carbon (using IRGA) in benthic incubation chambers flushed continuously with water. Incubations were of 15- 20 minutes duration, permitting measurements of productivity rates over diurnal and seasonal scales. Maximum biomass-specific net photosynthetic rates (PBmax) were highest in the spring and late-summer/fall (2.39, 1.98 mgC gDM-1 hr-1, respectively) and decreased to negative rates by early summer (−0.76 mgC gDM-1 hr-1). Directly measured rates of net primary production were simulated with the CGM. Simulated depth-integrated rates of Cladophora primary production were compared with published depth-integrated measurements of planktonic primary production from Lake Ontario. From the shoreline to the 12 m depth contour, the benthos was estimated to contribute 70% of the areal primary production. On a seasonal basis, attached macroalgae are an important component of the energy flux in the Lake Ontario nearshore. This phenology of Cladophora glomerata growing in the western end of Lake Ontario is also described. Based on internal stoichiometric ratios (C:P and N:P), and a positive correlation between the decrease in the biomass-specific maximum photosynthetic rate (PBm) and phosphorus quota (QP), Cladophora productivity at shallow depths was shown to be P limited. In addition, light attenuation through the Cladophora canopy was estimated to be 24.1 ± 3.3 (standard deviation) m-1 using paired light loggers deployed in situ. Acclimation to lower light levels through the Cladophora stand was demonstrated by significantly higher Cladophora chlorophyll concentrations at the base of the canopy. Decreases in Cladophora canopy cover in the summer resulted in increased PBm, even when QP remained near the minimal cell quota, indicating potential co-limitation of Cladophora productivity by light during peak standing crop. Cladophora growing at 1m depth was also shown here to be tolerant of high irradiance, with an average decline of less than 10% in Fv/Fm at during peak midday insolation, regardless of nutrient status or ambient water temperature. In conjunction with its role as a seasonally important nearshore primary producer, Cladophora appears to play a role as a seasonal nutrient regulator in the nearshore of Lake Ontario. The nutrient chemistry of nearshore lake water, Cladophora tissue, and a dominant tributary to western Lake Ontario were examined over the growing season of 2 years. As Cladophora grew and assimilated nutrients in the spring, total phosphorus (TP) and soluble reactive P (SRP) concentrations declined in the nearshore. Detachment and sloughing of Cladophora in the late summer was associated with increasing TP in the water column. These changes in nearshore nutrient concentrations were correlated with Cladophora phenology and not catchment loading. Nutrient loading from Oakville Creek was compared with the nutrient uptake of an adjacent Cladophora stand. The TP supply directly from the creek during the growing season was insufficient to meet the concentration of stored P in Cladophora tissue. It appears Cladophora is growing on P regulated by recycling within the lake, supporting the hypothesis that dreissenid mussels are sustaining Cladophora growth through recycling of TP in the lake. Cladophora remains P limited, however, such that increases in catchment loading would further augment its resurgence.

Sairah Malkin (2008). The ecology of the nuisance macroalga, Cladophora glomerata, and its resurgence in Lake Ontario. UWSpace. http://hdl.handle.net/10012/3592