Phytoplankton dynamics in nearshore and offshore regions of the Great Lakes Erie, Malawi, Tanganyika, and Victoria 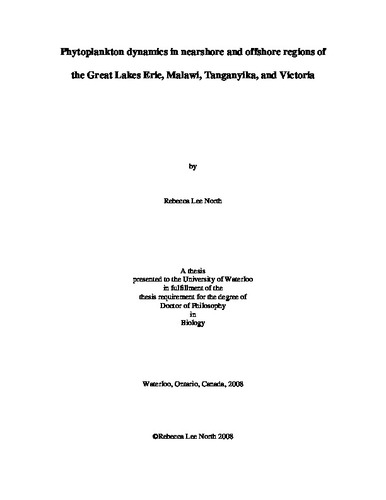 My doctoral thesis challenges the traditional paradigm of phosphorus (P) limitation of phytoplankton communities in freshwaters by suggesting colimitation of P, nitrogen (N), and iron (Fe) in Great Lakes. Oceanographers have recognized Fe, N and P colimitation, and biomass response to Fe is documented in freshwater lakes. I studied African and North American Great Lakes that are similar to large inland oceans. I discovered that Fe is a key nutrient that is often limiting in the offshore, and may explain the dominance of cyanobacteria in nutrient enriched lakes. I also discovered that the nearshore and offshore areas of these large lakes are very different, particularly when invasive dreissenid mussels are impacting the nearshore, as seen in the eastern basin of Lake Erie. As a result of the dreissenids, chlorophyll a (chla) concentrations are significantly lower in the nearshore of Lake Erie, but higher in the nearshore in the three African Great Lakes, as well as pre-dreissenid Lake Erie. The objective of my thesis was to determine the limiting nutrient(s) to the phytoplankton of the Great Lakes Erie, Malawi, Tanganyika, and Victoria in both the nearshore and offshore by measuring the physiological status of the phytoplankton. I also examined how dreissenids affect the distribution of seston and nutrient concentrations between the nearshore and offshore of the eastern basin of Lake Erie. My study design included temporal and spatial surveys in the nearshore and offshore of the four lakes, in which I used a variety of nutrient limitation indicators for P (C:P, N:P, P debt, APA, Fv/Fm), N (C:N, NH4 debt, NO3 debt, Fv/Fm), and Fe (Fv/Fm), as well as photosynthetic efficiency (Fv/Fm) experiments. Nutrient enrichment experiments were also conducted in the nearshore and offshore of the eastern basin of Lake Erie which involved the addition and removal of Fe alone, as well as in combination with P and/or N. Lake Erie nutrient enrichment experiments provided evidence for P, N and Fe colimitation where the addition of Fe with P relieved Fe and P limitation and allowed nitrate (NO3-) assimilation, alleviating N limitation. However, the offshore experiments indicated stronger Fe limitation than the nearshore experiment. Lower chla concentrations in the post-dreissenid nearshore of the eastern basin of Lake Erie may not be due entirely to lower phytoplankton biomass, as photoacclimation of the phytoplankton may also be occurring. Dreissenid grazing effects can be seen in the distribution of dissolved nutrient concentrations between the nearshore and offshore of post-dreissenid Erie. The African Great Lakes are threatened by expanding human populations, resulting in increased nutrient runoff; the consequences of which will depend on the limiting nutrient(s). I found that the nearshore regions of Lakes Malawi and Tanganyika were colimited by N and P, while the offshore regions were colimited by N, P and Fe. The nearshore of Lake Victoria was colimited by light and N, while the offshore was colimited by N, P and Fe. Fe limitation only occurs in the offshore, and positive, significant relationships were found between total dissolved Fe concentrations and cyanobacteria. Continued P and Fe loading to the lakes will create a higher N demand that will result in a shift to N2-fixing cyanobacteria, which has serious consequences to human and ecosystem health as they are a poor nutritive food source and some are potentially toxigenic. The majority of studies conducted on Great Lakes involve offshore sampling, however, the less understood nearshore is where human impacts and activities are concentrated. I discovered there are significant differences between the nearshore and offshore, which has implications for water quality monitoring.