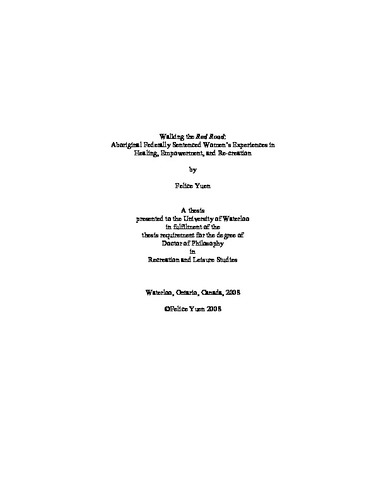 In 2001, when Aboriginal women comprised only 3.5% of Canadian women, 23% of Federally Sentenced Women (FSW) were Aboriginal. In the intervening six year period, the presence of Aboriginal women in Canada’s federal correctional facilities has risen to 31%. With female offenders often being treated as double deviants in mainstream society, Aboriginal female offenders may be regarded as triple deviants. Considerable research suggests that female offenders are marginalized for being criminals and even more so for deviating from the gendered norm of female (i.e., nurturer, caregiver). At the same time, Aboriginal female offenders are further ostracized for their race and for their cultural beliefs and traditions. This study recognized that the experiences of marginalization for Aboriginal federally sentenced women were linked to systemic discrimination and attitudes based on racial and/or cultural prejudice, and that the low socio-economic status and history of substance abuse and violence across generations were rooted in over 500 years of oppression and control through residential schools and other decrees legislated by the Indian Act. The growing awareness of problems related to Canada’s correctional system for female offenders, and the limited support and services for Aboriginal female offenders, led to the publication in 1990 of Creating Choices. The report essentially recommended a new system of incarceration that fostered the empowerment of FSW to make meaningful choices in order that they may live with dignity and respect. Based on the recommendations, federal corrections for women essentially aimed to move from a model of punishment to a model of rehabilitation. According to the experiences of the Aboriginal federally sentenced women in this study, the implementation of these changes in the management of federal corrections for women has allowed many Aboriginal women to experience their cultural traditions, some for the first time. The purpose of this study was to examine the effects of major Aboriginal cultural events, notably ceremony, on the identity development, empowerment, healing and rehabilitation of FSW. Data were gathered over a two-year period of engagement by the researcher with women in Aboriginal ceremonies within Grand Valley Institution, a federal prison for women located in Kitchener, Ontario. Six major themes were identified through the iterative process of data gathering and analysis. The themes, history, conscientizaçao, healing, re-creation, coming home, and travelling the Red Road, represent the women’s processes of healing, identity development and empowerment through engagement in Aboriginal ceremonies and traditions in a federal prison. The women’s experiences with Aboriginal traditions offered personal and collective healing through solidarity, resistance, re-creation and liberation. The women emphasized supportive, accepting, mutually respectful and caring relationships as a vital component in their processes of healing. The centrality of relationships was explored using feminist and Aboriginal theories, and a deepening of understanding came from viewing the findings within the context of a social ecological theory of empowerment. Aboriginal ceremony and traditions were considered leisure in this study, and leisure from an Aboriginal perspective is thus integrated in all aspects of life and represents re-creation, restoration and collective strength. It is in this sense that Aboriginal women found freedom, even within the confines of a federal prison. The emphasis the women placed on the quality of their relationships in terms of healing, empowerment, and re-creation suggests that equitable and caring relationships are particularly important in their growth and development. Women’s engagement with others and portrayals of an ethic of care in cermony invoked inspiration and strength. The resultant relations of community generated a network of resources which enabled the women to create change within the correctional setting. The findings from this study underscore the relevance of a re-evaluation of Canada’s correctional approach and suggest the adoption of a more restorative understanding of justice; that is, a more Aboriginal conceptualization of justice one that encompasses healing, restoring relationships, accountability and community involvement.