Studies on Pervaporation for Aroma Compound Recovery from Aqueous Solutions 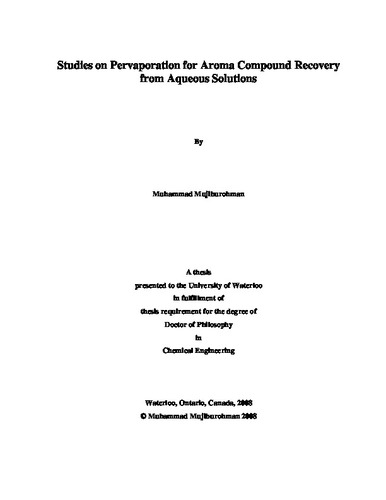 This study was concerned with the recovery of aroma compounds from aqueous solutions by pervaporation using poly(ether-block-amide) (PEBA) membranes. Three model aroma compounds (i.e., propyl propionate, C6-aldehyde and benzaldehyde) were used in the study to represent ester, aldehyde and aromatic aroma compounds, respectively. The effects of process conditions (i.e., feed concentration and operating temperature) on the pervaporation performance (in terms of permeation flux and selectivity) for aroma-water separations were investigated. It was found that both the aroma permeation flux and the selectivity were affected significantly by the feed aroma concentration. The aroma permeability was in the order of propyl propionate > C6-aldehyde > benzaldehyde, and the membrane selectivity for aroma/water separation followed the order of C6-aldehyde > propyl propionate > benzaldehyde. In general, the aroma flux was found to be proportional to the aroma compound concentration in the solution. In the concentration range (390-3,200 ppm) tested, the effect of temperature on the permeation flux followed an Arrhenius type of relation. The solubility and diffusivity of the aroma compounds in PEBA membrane, which determine their permeabilities through the membrane, were determined from the pervaporation and sorption/desorption data. It was shown that the solubility of the aroma compounds in the PEBA membrane generally followed the Henry’s law where the sorption uptake was proportional to the feed aroma concentration. Among the three aroma compounds studied, benzaldehyde was found to have the highest solubility selectivity in the PEBA membrane, followed by C6-aldehyde and propyl propionate. The solubilities of pure propyl propionate and water in PEBA membrane were also estimated; the solubility of pure propyl propionate was around 130 times higher than that of pure water. This confirmed that PEBA was an excellent organophilic membrane. The diffusivity of the aroma compounds through PEBA membrane was affected by the feed aroma concentration. From steady state pervaporation and equilibrium sorption data, the diffusivity was calculated on the basis of solution-diffusion model, and the diffusivity was shown to be linearly dependent on the feed aroma concentration. On the other hand, from the sorption kinetics data obtained from the time-dependent sorption experiments, the diffusivity was shown to be affected by the feed aroma concentration exponentially. The main reason may be that the simple form of the solution-diffusion model is unable to precisely describe the mass transport through the membrane during pervaporation. As an alternative to pervaporation where the liquid feed is in contact with the membrane and the mass transport involves permeation and evaporation (thus the word “pervaporation”), evaporation-permeation (or evapermeation, where the feed liquid is not in direct contact with the membrane and the mass transfer involves evaporation and then permeation) was also studied for aroma compound separation from water. It was shown that evapermeation was no better than pervaporation in terms of permeation flux and selectivity. This again demonstrated that the state of the membrane and the location for liquid-vapor phase change were important to the mass transport through the membrane. For aroma recovery from dilute aqueous solutions, batch pervaporation is often preferred. Batch pervaporation coupled with permeate decantation and water phase recycle was studied parametrically. It was demonstrated that compared to the conventional pervaporation, the aroma recovery can be enhanced by recycling the water phase from the permeate decanter to the feed for further recovery. In addition, unlike the conventional batch operation where the product concentration starts to decrease beyond certain time, the modified batch pervaporation allows a longer period of operation without compromising the product purity.