What you don't know can help you: Intuitive processing of incomplete visual stimuli 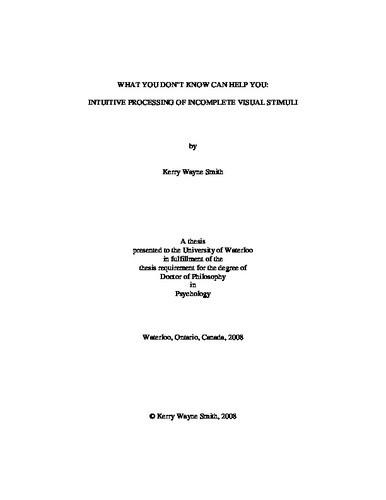 Intuition is an innate ability through which human beings acquire knowledge about the world around them. Throughout history people have speculated about how intuition operates and about the accuracy and usefulness of intuitively derived conclusions, but there have been few attempts at empirical investigation primarily due to the fact that a person using intuition does not appear to be doing anything at all. In fact, clinical lore suggests that that trying too hard may actually impede progress toward achieving an intuitively derived solution. As source of knowledge or understanding, intuition appears to stand somewhere between perception and reason. Phenomenologically, intuitively derived solutions resemble perceptions, in that both are experienced as “given,” however unlike perception intuition involves no discernable physiological pathway leading from sensory stimulation to the conscious awareness of some thing. Functionally, intuition has similarities to the process of reasoning, in that both can provide useful information about the world to consciousness. In use, however, intuition differs from reasoning, which takes place through explicit, observable intermediates between the recognition of a problem in need of a solution and the achievement of a successful solution. Intuition involves no such intermediates. Thus, intuition appears to be a function with neither pathway nor process. The set of studies discussed in Part A of this thesis was designed to examine the notion that, rather than an abrupt and disjunctive “change of state,” intuition is an incremental, accumulative process through which implicit and increasingly complete intermediates, or states of “partial knowledge” are generated prior to the achievement of a solution in consciousness. In Part A, it was demonstrated that unsuccessful attempts to identify objects portrayed in difficult visual gestalts significantly facilitated participants’ performance on a related partial-word solution task. When the unrecognized stimulus items were incoherent, i.e., altered so that the component parts were displaced and rotated relative to each other, the facilitation effect, while still significant, was less than when the unrecognized gestalt was coherent. This finding supports the idea that the amount of solution-relevant implicit knowledge generated in an unsuccessful attempt to solve a problem varies with the quality of information present in the problem situation. The set of studies in Part B examined the effect of inserting “dead air” interval between the visual gestalt and the related partial-word in the partial-word solution phase. Against prediction, coherent partial-word facilitation did not decrease at any interval condition, while incoherent partial-word increased at the longest interval condition. Overall, the findings are best explained by a bi-directional, dual-processing model in which the organization of visual stimuli and the symbolic labeling of sub-components within the visual stimuli are processed independently. Such a model could provide some context for the dispute between proponents of reorganization vs. forgetting in the debate about mechanism underlying incubation effects.