Shadow of the Wall 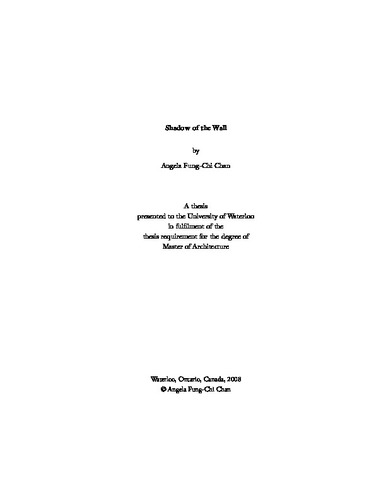 A rapid economic boom in the past decade has completely transformed China’s urban landscape into a theme park of skyscrapers. Architecture has become a means to showcase ambition and desire. Architects are forced to fit into a prescribed way of thinking and assist a powerful government to realize its vision of a utopian order. And as such, many of them are deprived of opportunities to thoroughly investigate the social issues that are affecting China’s urban development. Quite often, architects fall prey to political constraints and economic challenges. Despite China being a testing ground for handsome architecture and experimental urban planning, it is at the same time a graveyard of ethical architectural practices. In response to such pervasive conditions of architectural practice, this thesis investigates social and cultural issues in China that are beyond the control and repertoire of an architect; but ones that directly affect the development of this fast-modernizing nations. Across the dynasties, a unique walled culture was developed in the Chinese society, characterized by its emphasis on inward orientation and boundary making. The Ming dynasty reached the maturity of this walled culture when political hierarchy, strict morality and the obsession of wall building dominated society in an extreme fashion. It was during the Ming dynasty that the Great Wall was substantially extended in length. Inside the limits of this national boundary, the emperor enclosed each city itself within massive walled networks. In this way, the wall became a physical symbol of Chinese centrality and insularity, where massive walls, strict order and a focus on morality all worked together to create a physically and psychologically suffocating cultural atmosphere. Within this walled culture, a growing fear of a centralized bureaucratic power and a subsequent repression placed upon political criticism were commonplace. Today, almost five centuries after-the-fact, there remains a ghost of this former walled culture. Although most of these ancient symbols of physical control—the walls themselves—have fallen in ruin after the collapse of dynastical China, an invisible, psychological wall still remains in Chinese society to restrict any politically incorrect thoughts. The collective mind of contemporary China is struggling between the will of rapid modernization and the desire for free expression. The notion of ‘going modern’ and developing an advanced lifestyle now forms a kind of mutual consent between the government and the citizens. In order to enjoy their ‘modern’ lifestyles, contemporary Chinese must acknowledge and respect certain limits—they must always act and think for the collective good as determined by the government. The government sees suppression of free expression and covering up of social injustice as the best way to ensure social stability and centralization of power. It is for this reason that the ancient walls of China have gradually transformed into a psychological wall that haunts the mind of the citizens. From this perspective, the wall never really collapsed or became ruins—it still resides in the psychology of the collective. The concept of wall, physical and metaphorical, is the central theme of this thesis. It is not only to be understood as the physical realization of a superficial idea of protection, separation and control, but also as the dominant mechanism of repression, an invisible wall that continues to shape the Chinese national psyche today. This thesis attempts to reveal and confront the unspoken meaning of the wall in Chinese culture which has been buried under the glamour of national pride and glory. It presents a yearning to transform a wall that covers up injustice and inequality into a wall that connects to the underside of the social subconscious.