Verbal Repetition in the Reappraisal of Contamination-Related Thoughts 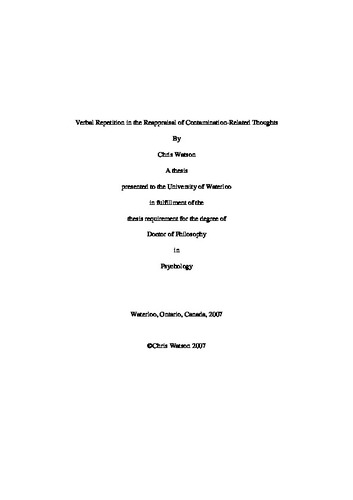 Acceptance and Commitment Therapy is a therapeutic approach that emphasizes the alteration of the relationship one has towards one’s thoughts, rather than attempting to change the content of thoughts. It seeks to promote the awareness of thinking as an ongoing relational process through cognitive defusion techniques. The verbal repetition of thoughts is a technique that has recently been shown in a single-case alternating treatment designs study to significantly reduce the believability and distress associated with self-relevant negative thoughts (Masuda, Hayes, Sackett, & Twohig, 2004). The present study compared the effects of verbal repetition with brief imaginal exposure and no intervention in reducing the believability, distress, and meaningfulness associated with contamination-related thoughts. Individuals with high levels of obsessive-compulsive symptoms identified three distressing contamination-related thoughts and made ratings of belief, distress, and meaningfulness for each thought, using 100-mm visual analogue scales. They were then randomly assigned to receive verbal repetition, imaginal exposure, or no intervention, after which they completed ratings at post-intervention and one-week follow-up. Participants also completed a category membership decision task to determine whether verbal repetition and/or imaginal exposure produces semantic satiation, a temporary loss of the literal meaning of words. Significant reductions in belief, distress, and meaningfulness were observed following verbal repetition at post-intervention and there was some maintenance of these gains one week later. In contrast, no significant reductions were observed at post-intervention following either imaginal exposure or no intervention. However, significant reductions in ratings of belief and distress were observed one week later following imaginal exposure. A semantic satiation effect was observed for only verbal repetition, and although there was no evidence that this effect was associated with reductions in appraisal ratings at post-intervention, there was some indication of a relationship with follow-up appraisal ratings. Implications of these findings are discussed in relation to cognitive-behavioural theories of obsessive-compulsive disorder.