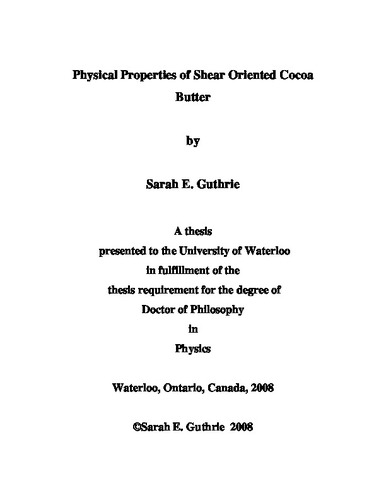 Cocoa butter is a highly complex system of triacyglycerides which has been shown to crystallize in a markedly different fashion under the application of shear. A rheometer insert was developed to enable the intact extraction of sheared samples for study of melting properties, crystal orientation and breaking stress. Samples were created by ramping from 50°C at three different cooling rates (0.5, 1 and 2°C/min) to three different end point temperatures (16, 18 and 20°C), creating nine different temperature sets. Viscosities of the cocoa butter samples under shear were recorded during sample creation and large jumps in viscosity were identified as form II and form V crystallization. Comparison of crystallization times for the nine different temperature profiles allowed for the conclusion that over a shear range of 90 – 1000 s^-1 there was no further appreciable shear acceleration of the form V transformation for the 16 and 18°C temperatures and only a slight increase up to 500 s^-1 for the 20°C temperature. Sheared samples were also examined with differential scanning calorimetry. Samples were examined for peak melting temperature on each of day 0, day 1, day 7 and day 28. Six of the nine different temperature conditions examined yielded a critical shear rate, above which the melting points of the samples were dramatically different than for low shear and no shear samples. For the day 0 and day 1 samples, above 500 s^-1 the melting temperatures were ~2°C higher than for 360 s-1 and below. For the day 7 and day 28 samples, above 500 s^-1 the peak melting temperatures were ~2°C lower than for the lower shear and no shear samples. The orientation of sheared samples was also examined using x-ray diffraction. In all of the nine temperature sets, orientation was present for shear rates of 360 s^-1 and higher. Breaking stress measurements were performed on sheared and non-sheared samples. These tests showed results remarkably similar to those seen in the DSC tests, with a critical shear rate existing in six of the nine temperature sets, above which an increase in the breaking strength occurs. Examination of samples on either side of the critical shear rate with x-ray diffraction yielded two distinct x-ray patterns leading to speculation that the application of high shear rates causes a change in the crystallization of cocoa butter leading to selective crystallization and the formation of a compositionally different form V crystal with fewer defects than its lower/no shear counterparts.