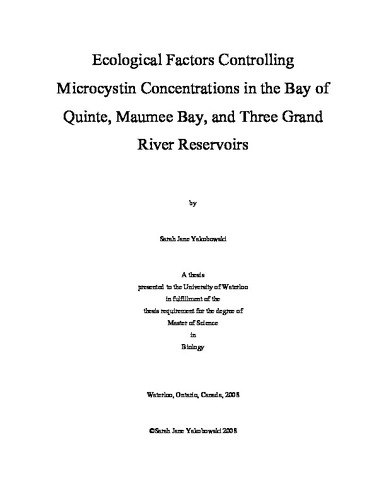 Certain types of cyanobacteria have the potential to produce toxins including microcystin, a hepatotoxin. Toxic cyanobacterial blooms are becoming increasingly common worldwide. They are a concern in the Great Lakes and surrounding waters. In this study, Lake Ontario’s Bay of Quinte, Lake Erie’s Maumee Bay, and three reservoirs along the Grand River were studied. Environmental variables, cyanobacterial biomass inferred from the Fluoroprobe, and microcystin concentrations were measured. In 2005 the three reservoirs, Belwood Lake, Conestogo Lake, and Guelph Lake were sampled every two weeks from July to September. Belwood Lake was also sampled in October when a cyanobacterial bloom occurred. In 2006 the Bay of Quinte was sampled twice, in July and September, and Maumee Bay was sampled twice, in June and August. Physical variables measured included water transparency and temperature. All species of nitrogen (N) and phosphorus (P) were measured, along with extracted chlorophyll a and particulate carbon (C), N, and P. The distribution of chlorophyll and major algal groups throughout the water column was profiled in situ using a spectral fluorometer (Fluoroprobe).Variable fluorescence of phytoplankton was assessed using Pulse Amplitude Modulated (PAM) fluorometry to measure photosynthetic parameters. Phytoplankton counts were performed on selected samples from the Bay of Quinte and Maumee Bay. Total and dissolved microcystin were measured using the protein phosphatase inhibition assay (PPIA). PPIA was chosen over alternative detection methods because it is a functional assay that measures the level of microcystin in a sample via the amount of protein phosphatase inhibition that it exerts. This yields ecologically relevant data as protein phosphatase inhibition is the main mode of microcystin toxicity. The PPIA formulation used in our lab was based on variations in the literature that use unconcentrated water samples directly in the assay. The assay was optimized to employ both a higher and lower standard curve through the use of two enzyme concentrations. The lower enzyme concentration allowed the method detection limit to be decreased to 0.05 µg/L to accommodate our low-microcystin samples. In the Bay of Quinte, microcystin levels were higher in July 2006 (total mean=2.25 μg/L ) than in September 2006 (total mean=0.58 μg/L). In July a cyanobacterial bloom consisting of 97% Microcystis spp. was present. In September 83% of the cyanobacterial biomass was composed of Anabaena spiroides and only 8% was Microcystis spp. In the Bay of Quinte elevated microcystin concentrations were associated with higher soluble reactive P levels, lower seston C:P molar ratios, and lower total N. In Maumee Bay microcystin levels were higher in August 2006 (total mean= 4.45 μg/L) than they were in June 2006 (<0.05 μg/L). In August a cyanobacterial bloom consisting of 22% Microcystis spp. and 48% Aphanizomenon flos-aquae was observed. Higher microcystin concentrations in Maumee Bay were associated with decreased total N: total P molar ratios, increased total P, and decreased water transparency as measured by Secchi depth. Belwood Lake had the highest microcystin levels of the three reservoirs but only once exceeded the recommended World Health Organization concentration of 1.0 μg/L. Belwood Lake’s largest cyanobacterial bloom in October 2005 was accompanied by relatively low microcystin levels (<0.2 μg/L). Conestogo and Guelph lakes always had microcystin levels below 0.2 μg/L and 0.6 μg/L, respectively. In the Grand River reservoirs, increased microcystin concentrations were associated with higher chlorophyll a, higher light attenuation coefficients, lower total N, lower total N: total P molar ratios, higher C:P molar ratios, lower nitrate, higher cyanobacterial biomass, and higher total P. When data from the Bay of Quinte, Maumee Bay, and Grand River reservoirs were pooled, total microcystin had the most significant positive correlation with total P. Total microcystin and water temperature also had a significant positive correlation.