Preference Elicitation in the Graph Model for Conflict Resolution 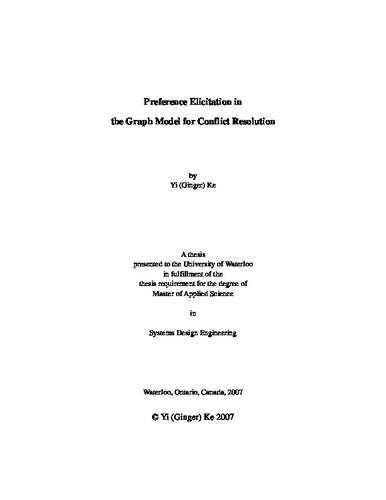 Flexible approaches for eliciting preferences of decision makers involved in a conflict are developed along with applications to real-world disputes. More specifically, two multiple criteria decision making approaches are proposed for capturing the relative preferences of a decision maker participating in a conflict situation. A case study in logistics concerned with the conflict arising over the expansion of port facilities on the west coast of North America as well as a transportation negotiation dispute are used to illustrate how these approaches can be integrated with the Graph Model for Conflict Resolution, a practical conflict analysis methodology. Ascertaining the preferences of the decision makers taking part in a conflict constitutes a key element in the construction of a formal conflict model. In practice, the relative preferences, which reflect each decision maker’s objectives or goals in a given situation, are rather difficult to obtain. The first method for preference elicitation is to integrate an Analytic Hierarchy Process (AHP) preference ranking method with the Graph Model for Conflict Resolution. The AHP approach is used to elicit relative preferences of decision makers, and this preference information is then fed into a graph model for further stability analyses. The case study of the Canadian west coast port congestion conflict is investigated using this integrated model. Another approach is based on a fuzzy multiple criteria out-ranking technique called ELECTRE III. It is also employed for ranking states or possible scenarios in a conflict from most to least preferred, with ties allowed, by the decision maker according to his or her own value system. The model is applied to a transportation negotiation dispute between the two key parties consisting of shippers and carriers.