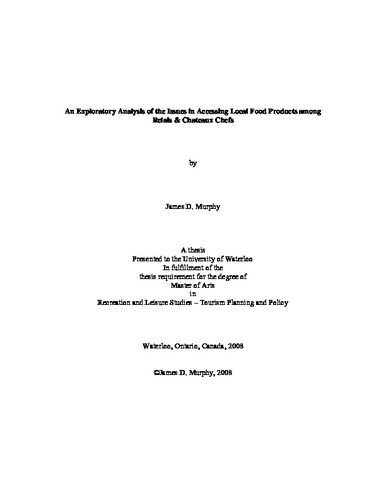 This study is an exploratory examination of the perceptions of chefs affiliated with Relais & Chateaux properties in Canada with respect to their relationships with suppliers, the importance of local ingredients in menu design, and other issues associated with their work as chefs in some of the top restaurants in Canada. Their understanding of the concept of “culinary tourism” is also explored. For the purpose of this study, culinary tourism is conceptually defined to be “any tourism experience in which one learns about, appreciates, or consumes branded local culinary resources” (Smith and Xiao, 2006, p. 4). Data for this study were obtained from three sources: (1) a closed-ended questionnaire, which inquired about acquisition, production and consumption issues associated with restaurant chefs (2) in-depth personal interviews with chefs that enabled the researcher to gain a holistic view of the role and results of chefs interaction with local food producers, and (3) a content analysis of Relais & Chateaux menus that served as a template to how chefs brand producers in their restaurants. A total of 11 chefs completed the survey and were interviewed between the months of June, 2007 and August, 2007. The comments by the chefs in the interviews were classified into 9 themes. The themes that emerged include producer relationships, producer communication, local ingredients, cuisine, restaurant staff, culinary tourism, knowledge of clientele, culinary products and Relais & Chateaux brand. The interviews resulted in a number of insights into chef relations with local food producers as well as the potential of culinary tourism as a tourism experience provided by Relais & Chateaux chefs. Chefs spend considerable time and effort facilitating relationships with local producers in order to create quality. These chefs expressed the importance of quality and relationships with local producers while highlighting the need for communication among properly trained waiters. Chefs used both menus and guests’ interaction with waiters to communicate the use of local ingredients in their restaurants. The chefs focus on local affiliations to products as a way to promote local producers. However, once relationships with a local producer are developed, some chefs maintain that relationship even if the move out of the area. Many chefs reported that increased interaction among culinary tourism stakeholders, at a regional level, was needed in order for regional producers to brand their products in the market place. With this it was recommended that bi-yearly meetings involving restaurateurs, producers, farmers and artisans is needed to better network their product offerings. In each case, the goal of the Canadian Relais & Chateaux chef is to improve upon the branding of Canadian food ingredients. The research revealed the positive impact that this group of chefs has had in promoting grass roots food products for an increasingly popular tourism market. Findings of this research suggest that chefs are involved in the production, education, facilitation and communication of local ingredients in the restaurant setting which raises issues of their role in the branding of local food ingredients for the culinary tourist in order to promote a healthy culinary tourism product. The study concludes with suggestions for further research in this area.