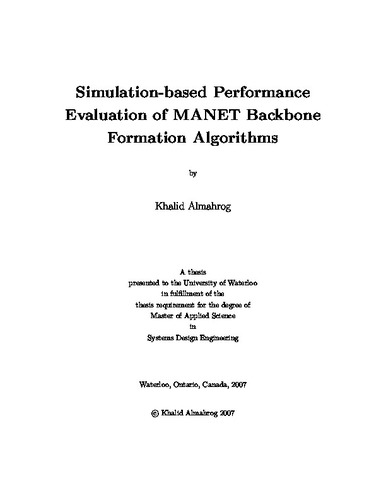 As a result of the recent advances in the computation and communications industries, wireless communications-enabled computing devices are ubiquitous nowadays. Even though these devices are introduced to satisfy the user’s mobile computing needs, they are still unable to provide for the full mobile computing functionality as they confine the user mobility to be within certain regions in order to benefit from services provided by fixed network access points. Mobile ad hoc networks (MANETs) are introduced as the technology that potentially will make the nowadays illusion of mobile computing a tangible reality. MANETs are created by the mobile computing devices on an ad hoc basis, without any support or administration provided by a fixed or pre-installed communications infrastructure. Along with their appealing autonomy and fast deployment properties, MANETs exhibit some other properties that make their realization a very challenging task. Topology dynamism and bandwidth limitations of the communication channel adversely affect the performance of routing protocols designed for MANETs, especially with the increase in the number of mobile hosts and/or mobility rates. The Connected Dominating Set (CDS), a.k.a. virtual backbone or Spine, is proposed to facilitate routing, broadcasting, and establishing a dynamic infrastructure for distributed location databases. Minimizing the CDS produces a simpler abstracted topology of the MANET and allows for using shorter routes between any pair of hosts. Since it is NP-complete to find the minimum connected dominating set, MCDS, researchers resorted to approximation algorithms and heuristics to tackle this problem. The literature is rich of many CDS approximation algorithms that compete in terms of CDS size, running time, and signaling overhead. It has been reported that localized CDS creation algorithms are the fastest and the lightest in terms of signaling overhead among all other techniques. Examples of these localized CDS algorithms are Wu and Li algorithm and its Stojmenovic variant, the MPR algorithm, and Alzoubi algorithm. The designers of each of these algorithms claim that their algorithm exhibits the highest degree of localization and hence incurs the lowest cost in the CDS creation phase. However, these claims are not supported by any physical or at least simulation-based evidence. Moreover, the cost of maintaining the CDS (in terms of the change in CDS size, running time, and signaling overhead), in the presence of unpredictable and frequent topology changes, is an important factor that has to be taken into account -a cost that is overlooked most of the time. A simulation-based comparative study between the performance of these algorithms will be conducted using the ns2 network simulator. This study will focus on the total costs incurred by these algorithms in terms of CDS size, running time, and signaling overhead generated during the CDS creation and maintenance phases. Moreover, the effects of mobility rates, network size, and mobility models on the performance of each algorithm will be investigated. Conclusions regarding the pros and cons of each algorithm will be drawn, and directions for future research work will be recommended.