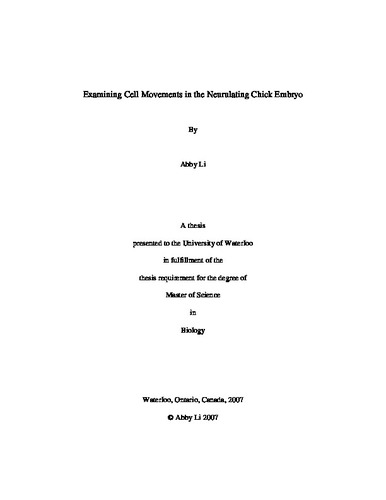 The avian embryo is a popular animal model because it is widely available (Antin et al., 2004), it is easily manipulated, and it can provide important insights into normal and abnormal embryo development (Kulesa, 2004). While in vivo and in vitro cultures of chick embryos are common, in ovo cultures are rarer, and none have been designed where the egg did not have to be resealed afterwards. The present study aimed to develop a set-up in which the egg would be windowed without resealing the egg so that the embryo would remain accessible for experimental manipulation. As well, this study aimed to track cell movement during neurulation by microinjecting points of dye along the embryo. Two prototypes were developed based on the concept that temperature and moisture controlled air passing over the windowed egg would serve as a blanket. When these prototypes were unable to keep the embryo alive, a protocol developed by Kulesa and Fraser (2004) was adapted for the study. This protocol involved the construction of a Teflon window which was placed in the windowed egg and sealed with beeswax. Initial microinjection tests with Fast Green FCF showed that the dye dissipated quickly after injection, most likely because of the hydrophilicity of the dye. Therefore, a list of non-fluorescent, hydrophobic dyes were chosen and tested for suitability to cell tracking. Time restrictions prevented the actual cell tracking experiments from taking place, but it was found that Oil Red O fulfilled the criteria. As Oil Red O is usually used to identify lipids in static experiments, it remains to be seen whether it would function as a vital dye. Future experiments include expanding the set-up for use with a confocal microscope for a 4-D rendering of cell movement, and taking advantage of the symmetrical nature of neurulation in the chick embryo to examine perturbations to the normal progress of development, via drugs such as valproic acid.