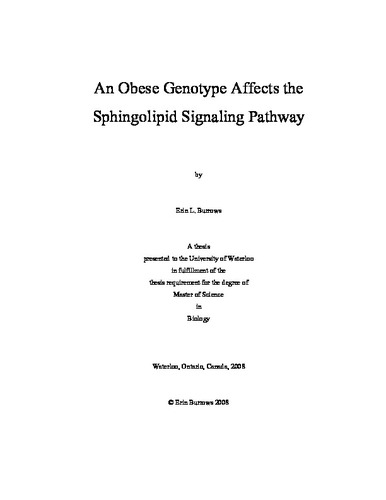 Sphingolipids are important signaling molecules regulating cell growth, cell death and differentiation, thus making them important molecules in determining the fate of a cell and in the pathogenesis of chronic illnesses. The sphingolipid signaling pathway can be initiated by reactive oxygen species (ROS) and inflammatory molecules, both of which are believed to be upregulated in a state of obesity. The hypothesis tested in this dissertation is that due to the inflammatory state of obese animals, the sphingolipid pathway is altered, shifting the balance of pro- and anti-apoptotic proteins and contributing to the pathogenesis of diseases associated with an obese state. The specific aims were to compare, 1) key sphingolipid signaling enzymes; 2) levels of sphingolipid signaling molecules and 3) pro and anti-apoptotic protein levels, in hepatic and colonic tissues procured from lean and obese animals. Obese animals are susceptible to various diseases, including colon cancer and hepatic steatosis. To assess the effect of obesity on sphingolipid signaling, and to provide insight as to the pathogenesis of diseases in a state of obesity, liver and colon tissues from Zucker obese female rats (fa/fa) were compared to tissues from their lean counterparts (Fa/fa or Fa/Fa Zucker rats). Enzyme analyses included an assay of sphingomyelinase (SMase) activity and quantification of ceramidase and sphingosine kinase-1 (SK1) protein expression by western blot. Also, sphingomyelin (SM), ceramide, ceramide-1 phosphate (C1P), sphingosine and sphingosine-1-phosphate (S1P) levels were determined by high-performance liquid chromatography (HPLC) -tandem mass spectroscopy (MS). Representative apoptotic proteins, Bax and Bcl-2 were quantified by western blot. Obese liver demonstrates hepatic steatosis in the Zucker animal model. Among the major differences noted between obese and lean liver were significantly upregulated ceramidase, and downregulated SK1 and C1P levels (P<0.05), as well as a difference in ceramide and SM species composition. Bax was overexpressed while Bcl-2 level was lower in obese compared to lean liver (P<0.05). Taken together, the results indicate a shift toward higher apoptotic signaling in obese liver tissue and correspond with the diseased state of the steatotic liver. Analysis of the sphingolipid pathway in colon revealed upregulation of ceramidase and downregulation of SK1 (P<0.05), similar to liver tissue. C1P levels were lower (P<0.05) but no changes were observed for ceramide, SM or sphingosine levels. A trend toward higher SMase activity in obese colon was observed. Bax was overexpressed in obese colon tissue (P< 0.05), while Bcl-2 results were inconclusive. The liver expressed lower level of molecules associated with sphingolipid signaling than the colons. This study is first to demonstrate tissue-specific differences in the sphingolipid signaling pathway, regardless of genotype. Nevertheless, overall the genotype of Zucker model was found to be a factor altering the expression levels of various sphingolipid enzymes and metabolites in both colon and liver. The findings of the present research provide incentive to further understand the role and modulation of sphingolipid signaling pathway in causation and prevention of chronic diseases prevalent in obese state.