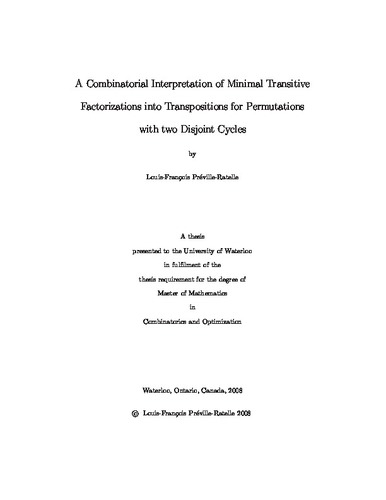 This thesis is about minimal transitive factorizations of permutations into transpositions. We focus on finding direct combinatorial proofs for the cases where no such direct combinatorial proofs were known. We give a description of what has been done previously in the subject at the direct combinatorial level and in general. We give some new proofs for the known cases. We then present an algorithm that is a bijection between the set of elements in {1, ..., k} dropped into n cyclically ordered boxes and some combinatorial structures involving trees attached to boxes, where these structures depend on whether k > n, k = n or k < n. The inverse of this bijection consists of removing vertices from trees and placing them in boxes in a simple way. In particular this gives a bijection between parking functions of length n and rooted forests on n elements. Also, it turns out that this bijection allows us to give a direct combinatorial derivation of the number of minimal transitive factorizations into transpositions of the permutations that are the product of two disjoint cycles.