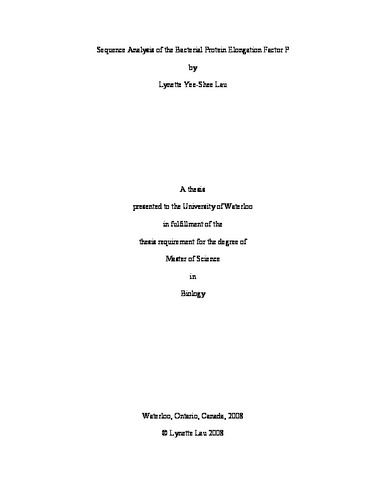 In 1975, Elongation Factor P (EF-P) protein was first discovered in the bacterium Escherichia coli. EF-P is believed to facilitate the translation of proteins by stimulating peptide bond synthesis for a number of different aminoacyl-tRNA molecules in conjunction with the 70S ribosome peptidyl transferase. Known eukaryotic homologs, eukaryotic translation initiation factor 5A (eIF-5A) of EF-P exist but with very low sequence conservation. Nevertheless, because of the high sequence similarities seen between bacterial EF-Ps and its low sequence similarity with eIF-5A, there is interest in the pharmaceutical industry of developing a novel antibacterial drug that inhibits EF-P. Of 322 completely sequenced bacterial genomes stored in GenBank, only one organism lacked an EF-P protein. Interestingly, sixty-six genomes were discovered to carry a duplicate copy of efp. The EF-P sequences were then used to construct a protein phylogenetic tree, which provided evidence of horizontal and vertical gene transfer as well as gene duplication. To lend support to these findings, EF-P GC content, codon usage, and nucleotide and amino acid sequences were analyzed with positive and negative controls. The adjacent 10 kb upstream and downstream regions of efp were also retrieved to determine if gene order is conserved in distantly related species. While gene order was not preserved in all species, two interesting trends were seen in some of the distantly related species. The EF-P gene was conserved beside Acetyl-CoA carboxylase genes, accB and accC in certain organisms. In addition, some efp sequences were flanked by two insertion sequence elements. Evidence of gene duplication and horizontal transfers of regions were also observed in the upstream and downstream regions of efp. In combination, phylogenetic, sequence analyses, and gene order conservation confirmed evidence of the complex history of the efp genes, which showed incongruencies relative to the universal phylogenetic tree. To determine how efp is regulated, the upstream regions of efp were used to try to predict motifs in silico. While statistically significant motifs were discovered in the upstream regions of the orthologous efp genes, no conclusive similarities to known binding sites such as the sigma factor binding sites or regulatory protein binding sites were observed. This work may facilitate and enhance the understanding of the regulation, conservation, and role of EF-P in protein translation.