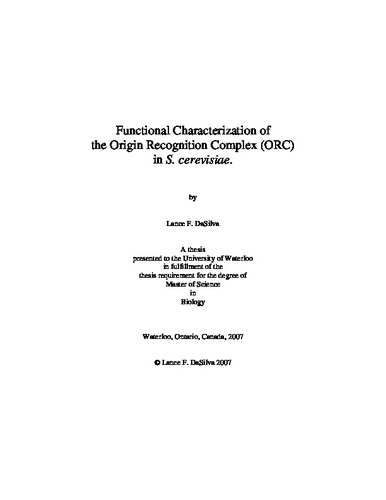 The origin recognition complex (Orc1-6) plays a fundamental role in the initiation of DNA replication by binding replication origins throughout the budding yeast cell cycle. ORC acts as a scaffold for the assembly of the pre-replicative complex (pre-RC) factors Cdc6, Cdt1 and a replicative helicase, the minichromosome maintenance (MCM2-7) complex in G1 phase. Upon assembly, origins are then said to be “licensed” for DNA replication. Previous models of pre-RC assembly and function have predicted that once MCMs have been loaded onto chromatin, ORC and Cdc6 are no longer required for DNA replication. In contrast, data from our lab strongly suggest a role for Orc6 in the maintenance of MCMs after pre-RC formation. Orc6 was found to be required for the chromatin maintenance of Mcm2 and more specifically, chromatin immunoprecipitation (ChIP) analysis demonstrated that Orc6 was necessary for the continued origin association of MCM proteins in late G1 at the early-firing origin ARS1, and the late-firing origin ARS609. It was also determined that after destabilization in the absence of Orc6, the pre-RC could be reassembled and facilitate DNA replication in late G1 after Orc6 expression had been turned back on. Interestingly, the clamp loading protein Cdc6 was also discovered to be essential to the maintenance of MCM proteins on bulk chromatin and at ARS1.