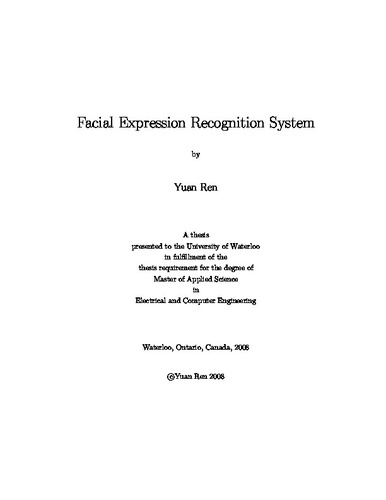 A key requirement for developing any innovative system in a computing environment is to integrate a sufficiently friendly interface with the average end user. Accurate design of such a user-centered interface, however, means more than just the ergonomics of the panels and displays. It also requires that designers precisely define what information to use and how, where, and when to use it. Facial expression as a natural, non-intrusive and efficient way of communication has been considered as one of the potential inputs of such interfaces. The work of this thesis aims at designing a robust Facial Expression Recognition (FER) system by combining various techniques from computer vision and pattern recognition. Expression recognition is closely related to face recognition where a lot of research has been done and a vast array of algorithms have been introduced. FER can also be considered as a special case of a pattern recognition problem and many techniques are available. In the designing of an FER system, we can take advantage of these resources and use existing algorithms as building blocks of our system. So a major part of this work is to determine the optimal combination of algorithms. To do this, we first divide the system into 3 modules, i.e. Preprocessing, Feature Extraction and Classification, then for each of them some candidate methods are implemented, and eventually the optimal configuration is found by comparing the performance of different combinations. Another issue that is of great interest to facial expression recognition systems designers is the classifier which is the core of the system. Conventional classification algorithms assume the image is a single variable function of a underlying class label. However this is not true in face recognition area where the appearance of the face is influenced by multiple factors: identity, expression, illumination and so on. To solve this problem, in this thesis we propose two new algorithms, namely Higher Order Canonical Correlation Analysis and Simple Multifactor Analysis which model the image as a multivariable function. The addressed issues are challenging problems and are substantial for developing a facial expression recognition system.