Light, Dark, and all That’s in Between: Revisiting the Role of Light in Architecture 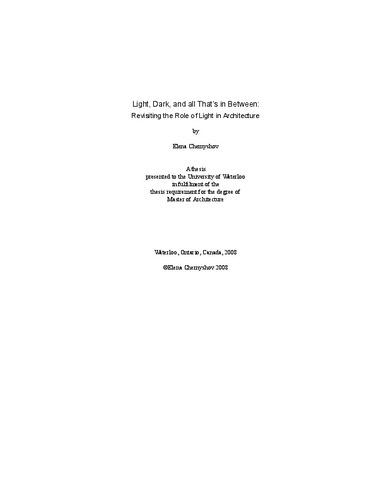 Natural light, aside from its functional roles, has little significance in many contemporary spaces. The decline of its earlier shared cultural values and lack of any other to replace these translates into an impoverishment of architecture’s deeper experience and significance. By evaluating the connections that exist between light and architecture, and, consequently, between light and man, a better comprehension can be attained of its present value and of its potential as a creative inspiration and as an agent of its expression. By tracing the relationship between light and architecture in Western culture, the forces that have shaped its significance are revealed. From agrarian cultures that connected closely to nature, to the anthropocentric modern era, the way light is treated in architecture has expressed the cultural relationship not only to the sun, to the light itself, but also to nature and to one’s own position within it. The understanding of this progression and the analysis of the contemporary episode of this narrative elucidates the current significance and approach to light in architecture. The profound focus on light by many individual architects and architectural writers acknowledges its importance in contemporary architecture, although its collective cultural significance remains uncertain. A broader conception of light’s significance and ways of integrating it more meaningfully with architecture can be derived from positioning three case studies as complementary to the contemporary episode of its story. These case studies – the tearoom of the Katsura Palace, Junichiro Tanizaki’s book In Praise of Shadows, and photographic series Colors of Shadow by Hiroshi Sugimoto – exhibit nuance and subtlety in consideration of light and shadows alike, illustrating a different approach and attitude to natural lighting. Light becomes more than an enriching physical phenomenon or agent of poetic evocation, it creates a deeper connection of man to his surroundings. Two designs – a house and a library – explore this connection and the potential of light to articulate dwelling. In these, the encounters with light and shadows are palpable and intrinsic to the architectural space fostering the ability to appreciate light and its attendant significance.