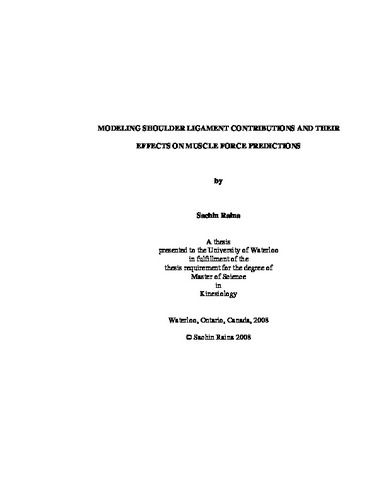 Mathematical musculoskeletal modeling and simulation provide a means for proactive injury prevention. To be effective, these models must physiologically replicate shoulder function. Although several muscle force prediction (MFP) shoulder models exist, few have attempted to integrate the force contributions of ligaments, especially the glenohumeral ligaments. The purpose of the current study was to integrate seven shoulder ligaments into an existing computational shoulder model, and analyze both individual ligament characteristics and the influence on the model outputs. Using data from the literature, seven shoulder ligaments were integrated into the model: the costoclavicular, conoid, trapezoid, coracohumeral, superior glenohumeral, middle glenohumeral, and inferior glenohumeral. 10 subjects performed isometric exertions in 56 posture-force combinations. Upper body posture and hand force collected were used as inputs for three different model versions; No-Ligaments (NL) included, Glenohumeral-Ligaments (GH) included, and All-Ligaments (AL) included. Electromyographic (EMG) signals from 11 muscle sites were used for comparison with model MFPs. The primary analysis focused on the differences between the GH and NL versions. Normalized EMG amplitudes were plotted against normalized MFPs from both models. Ligament effects on model outputs were measured by comparing changes in correlation between EMG and MFP, changes in slopes regression lines relating EMG to MFP, and the frequency of zero-force prediction by the model. Paired Student’s t-tests were used to measure significant differences. Results showed significant correlations (Pearson product) between EMG amplitude and MFP in the lower trapezius and infraspinatus muscles (p<0.01). No significant differences were found in r-values for these muscles between the NL and GH model. Slopes of regression lines decreased when GH ligaments were added, while the change in zero-force predictions varied by muscle. This study highlights the sensitivity of musculoskeletal models to the inclusion of ligament forces. Though correlations did not change, decreases in slope indicate increased force prediction by the GH model. Though zero-force predictions for some muscles increased, the results from those that decreased suggest muscles are active in postures where they were originally believed to be inactive. This finding suggests that inclusion of GH ligaments into our model may help predict antagonist muscle activity. However, further research is required.