Measurement of Surface Tensions in Aggregated Cells of the Embryonic Chick 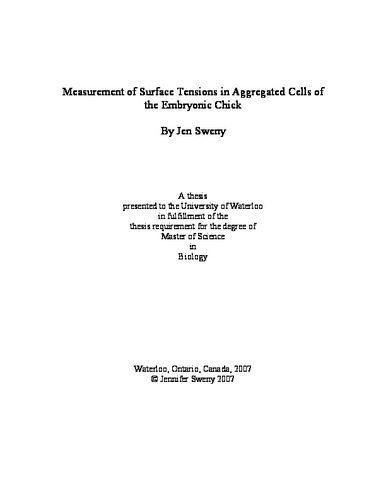 Cell surface properties are crucial to the mechanisms by which groups of cells organize themselves during embryogenesis, cancer metastases and tissue engineering. Measured surface tension values provide a quantitative basis for predicting a range of cell behaviors including sorting of embryonic cells, self-organization of pancreatic islet cells and invasive potential of tumor cells. Tissue surface tensions are a measurement of the tension that acts along the interface between a cell aggregate and its surrounding media and it is typically measured by compressing an aggregate of cells. In this study a novel apparatus is used to measure the surface tensions of aggregated embryonic chick cells from heart, liver, neural retina and mesencephalon tissues. These surface tension values are consistent with the known engulfment behavior of the cells involved and are in close agreement with measurements made previously by other means. It has been suggested that surface tensions and cell rearrangement patterns are a direct result of adhesion forces between cells arising from cadherins. However, cadherin binding alone is insufficient to account for observed engulfment phenomena and recent experimental evidence suggests that actin dynamics are involved. A cell surface property referred to as interfacial tension or cortical tension takes into account both adhesion forces and forces derived from actin microfilaments and could shed new light on the mechanisms involved in cell interactions. Computer simulations indicate that the interfacial tension between cells can be measured through a modified compression test experiment. In this cell aggregate compression study, cell shapes as well as the aggregate profile are measured in addition to the compression force in attempts to measure cell interfacial tensions.