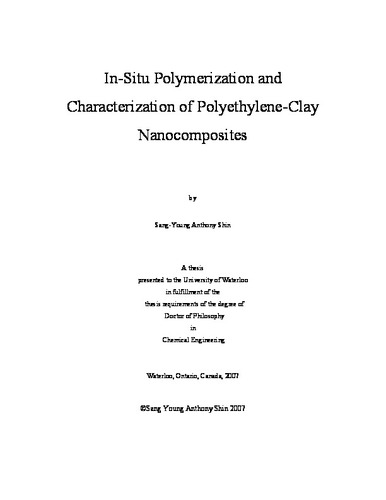 Abstract Chapter 1 provides an overview of this study and a literature review. Emphasis is put on the materials used, the different processes available to synthesize polymer-clay nanocomposites, analytical methods to characterize nanophase materials and on the impact of the nanophase on the final physical properties of polymer-clay nanocomposites. Chapter 2 discusses PE-clay nanocomposites which were synthesized using metallocene and Ni-diimine catalysts through in-situ polymerization. Morphological studies were carried out by XRD, SEM, EDX, and TEM to investigate the intercalation and exfoliation mechanism. Prior to its injection into the polymerization reactor, montmorillonite (MMT) was treated with triisobutyl aluminum and undecylenyl alcohol (UOH). Triisobutyl aluminum (TIBA) can react with hydroxyl groups on the surface of MMT and UOH is able to react with TIBA on the MMT surface. An alkoxy bond is generated by the reaction of the hydroxyl groups of UOH with the TIBA on the surface of MMT. A single site catalyst was then supported on the MMT/TIBA/UOH support, generating a MMT/TIBA/UOH/CAT system. The free vinyl groups of the surface UOH molecules can be copolymerized with ethylene, leading to the formation of chemical bonds between the MMT surface and polyethylene (PE). Ethylene polymerizations with the MMT/TIBA/UOH/CAT system were compared with ethylene polymerization with unsupported catalysts. The resulting PE-clay nanocomposites were analyzed with electronic and optical microscopes to confirm the nanophase distribution of MMT platelets in the polymer matrix. TEM images showed that the exfoliated MMT layers appeared as single layers or aggregated layers in the polyethylene matrix. After Soxhlet extraction with boiling 1,2,4-trichlorobenzene, the morphology of the residue particles remaining the thimble showed polymer fibrils stemming from the MMT surface, providing direct evidence of the chemical bonds between MMT surfaces and polymer matrix. Some residue particles also show PE-clay hybrid fibers between the particles. Through SEM/EDX analysis, it was confirmed that the fiber’s composition possessed silicone atoms together with carbon atoms. Chapter 3 discusses the results of in-situ polymerizations in gas-phase. The same catalyst systems and polymerization conditions discussed in Chapter 2 for slurry polymerization were applied to the gas-phase polymerization in order to investigate the particle fragmentation mechanism. After gas-phase polymerization at atmospheric pressure, the surface morphologies were investigated by SEM and TEM. In the case of the MMT/TIBA/UOH/Cp2ZrCl2 system, small particles (< 10m) were shattered from the larger particles (> 100 m) in the early stages of polymerization. After 24-hours of continuous polymerization, polymer fibrils growing from the inside of the MMT particles were observed by SEM. After further investigation with TEM, the cross-section profile of the particles showed curved bundles of MMT platelets, which illustrates exfoliation starting from the edges of the MMT particles. The MMT/TIBA/UOH/Ni-diimine system shows a different surface morphology after polymerization. In the early stages of the polymerization, polymer films were generated from the inside of the particles. After further polymerization, the MMT particles shattered and formed aggregates of PE-clay nanocomposites, similar to the ones proposed in the multigrain model. Chapter 4 discusses the copolymerization of ethylene and acrylonitrile. Ethylene/acrylonitrile copolymers were produced in the presence of a Ni-diimine/EASC catalyst system without the use of supports. Polymerizations of ethylene and acrylonitrile showed comparable activities in low concentrations of acrylonitrile. However, in higher concentrations, acrylonitrile induced a reductive elimination of the alkyl groups in the activated nickel-diimine catalyst. Conclusively, GPC analyses showed that acrylonitrile behaves as a chain transfer agent, showing reductive elimination of alkyl groups in the catalytic active center. The polymerization product morphology was analyzed by SEM and TEM. Polyacrylonitrile domains were observed in the polyethylene matrix and confirmed its nanosize distribution in the polyethylene matrix. DSC analysis of ethylene/acrylonitrile copolymers shows that an exothermic reaction takes place from 300 C to 370 C. This exotherm band detected by DSC can be related to the cyclization and aromatization of the nitrile groups of polyacrylonitrile. Through IR analysis of the ethylene and acrylonitrile polymer under high temperatures, this cyclization and aromatization was confirmed to be the cause of the decrease of the nitrile band (at 2244 cm-1) and increase of the vinyl bands (at 1640 cm-1). In addition, thermal treatment in DSC and successive XRD analysis showed the formation of the lamellar structures in the polyethylene matrix, reported as lamellar formation of polyacrylonitrile due to cyclization and aromatization of nitrile groups. The decomposition temperatures measured by TGA increased up to 50 C due to the presence of the nitrile groups in the polymer matrix. Tensile testing showed that the modulus increased, together with the yield strength and elongation. This phenomenon supports that strong interfacial interactions exist between the polyethylene matrix and polyacrylonitrile domains, as confirmed by TEM and IR analysis. Chapter 5 introduces the idea of acrylonitrile as a clay surface modifier. MMT was treated with acrylonitrile, using the same modification method of MMT that was applied in the MMT/TIBA/UOH/CAT system in Chapter 2. The nitrile groups in PE-MMT/TIBA/AN/CAT composites were confirmed at 2244 cm-1 by IR analysis. DSC analysis of PE-MMT/TIBA/AN/CAT showed that an exothermic reaction takes place from 300 C to 375 C. Successive DSC analysis with the same sample showed a new glass transition temperature band, induced by the reduction of polymer chain mobility. The basal diffraction band disappeared due to the exfoliation of MMT. Tensile tests showed an increase in modulus, without sacrificing the yield strength and elongation of PE-clay hybrid composites. Through these analyses, it was confirmed that strong interfacial forces exist between the polyethylene matrix and MMT layers in these PE-clay nanocomposites.