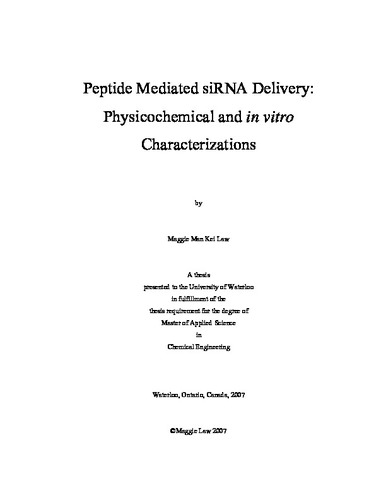 Short interfering RNAs (siRNAs) trigger RNA interference (RNAi) both in vitro and in vivo, where the expression of the encoded protein is silenced. Its potential use as a therapeutic agent is limited by its rapid enzymatic degradation and low cellular uptake. Therefore, a delivery carrier is desired to increase its solution stability and improve cellular uptake. In this study, Arginine-9 (R9), a cell penetrating peptide derived from the HIV 1 Tat protein, was investigated as a potential carrier for siRNAs at pH 7.3. The optical activity of siRNA decreased with increasing R9 concentration, with only 7.8±3.8% of the initial absorbance at 260nm remained at siRNA saturation. The highest binding ratio of R9 to siRNA determined from the UV/Vis spectra was 10.3:1 (corresponds to a charge ratio of 2.2:1 (+/-)). The measured hydrodynamic diameter increased with increasing R9, with a maximum value of ~1um at siRNA saturation. At R9 to siRNA charge ratios below 5.74:1, the surface charge of the complexes increased rapidly with the addition of R9. However, the rate of increase of Zeta potential decreased significantly with subsequent addition of R9. At charge ratio above 1.43:1, the complexes expressed low surface charge which led to the formation of aggregates in solution. A new peptide library was designed which utilized several properties of known cell penetrating peptides. In vitro siRNA transfection of eGFP siRNA with C166-GFP cells was used to determine the transfection efficiency of the new peptides. Preliminary results of the newly designed peptides showed that some of them are not as effective when compared to Lipofectamine 2000 (Invitrogen). However, this experimental protocol can be extended to study transfection efficiency of the remaining peptides in the library.