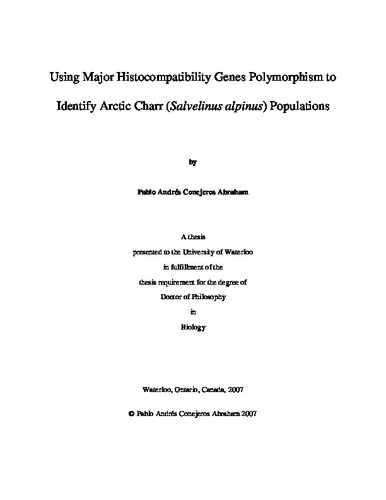 Arctic charr is the most northerly distributed salmonid and the most abundant fish in high latitude postglacial lakes. Arctic charr lives in oligotrophic water bodies where it has been able to adapt and thrive due, in part, its noted outstanding phenotypic plasticity. Throughout its geographic range, the Arctic charr has had to specialize to get the most of each ecosystem, to the point that Arctic charr were originally described as 56 different species and only later considered as many phenotypic variations of the same group, called the Arctic charr complex. With the aim of using the resources available in areas with very low primary production, Arctic charr often specialize to become different morphotypes within the same water body. Each morphotype can follow different life histories that can be anadromous or non-migratory. In several lakes, the non-migratory stocks may also differentiate further, each form with its own trophic and/or reproductive behavior. Adult sympatric forms may differ in depth distribution, size-at-maturity, time and place of spawning, color and/or other meristic characters that include differential gill raker and vertebrae numbers. The two typical forms that are found in sympatry are a small, profoundal form often termed “dwarf” Arctic charr and a large, littoral or pelagic zone resident often termed “Normal” Arctic charr. The Arctic charr colonized most of its current habitat very recently, after the ice retreat in the late Pleistocene, 10000-15000 years ago. The reproductive isolation of stocks, if it has occurred at all, occurred so recently that the accumulated genetic drift often does not yield enough data to support the genetic separation of the stocks. Since the geographic borders of the stocks tend to be unclear and because the Arctic charr is a migratory species, the management of fisheries can be difficult in light of these issues, this thesis examines the potential for identifying Arctic charr populations using Major Histocompatibility (MH) genes as molecular markers. MH genes are useful because they are not neutral markers, but are subject to selection. MH receptors present peptides to T-lymphocytes and from that interaction the immune system defines what is self or non-self and thus whether or not immune reactions should be initiated. Due to the large variety of potential pathogenic peptides to be presented, the domain of the MH receptor that binds the peptide, the peptide binding region, is the most polymorphic coding region known. Each individual has a limited number of MH alleles. Given the high degree of polymorphism in populations it is virtually impossible that two individuals will share the same set, of MHC alleles with the exception of monozygotic twins. Since MH receptors present peptides derived from pathogens, they are related to disease resistance, and some MH alleles are more effective at presenting certain peptides than others. Therefore, populations settled in a specific niche will interact with a defined variety of pathogens that will select for certain patterns in the MH alleles of the population. The selection of these MH allelic patterns occurs rapidly, since they determine the survival of the individuals during disease outbreaks. Rapid selection means that MH allelic patterns they can be used to differentiate populations that have been separated for relatively short periods of time. The MH genes of Arctic charr had not been characterized before the publication of this thesis, so the first step was their isolation and characterization. We found the MH sequences obtained to have typical characteristics of classical MH receptors, sharing similarities with other salmonids and having most of their variation in the peptide binding region. We next characterized populations of Arctic charr selected from the global distribution using the three polymorphic MH receptors. For all of the receptor we found most of the polymorphisms distributed equally amongst the populations, but the interpopulation diversity was generally enough to differentiate at least some of the studied populations. For the MH Class I we studied three non classical (UCA, UGA, UEA) and one classical (UBA) gene. For UBA and UCA we found a large degree of polymorphism while UGA and UEA were not very polymorphic. Despite the fact that the UGA gene was also not polymorphic in studies of rainbow trout, we found the gene to be the best Class I population marker for Arctic charr because it had the highest relative rates of interpopulation diversity. Thus, UGA may be exhibiting some antigen presentation functions in Arctic charr. The population analysis using MH Class II α and Class II β genes were the most successful. Particularly in the case of Class II β, the analyses arose capable of differentiating all the populations chosen for this study. Both genes showed high levels of polymorphism and high rates of non-synonymous/synonymous substitution in the exon that encodes the peptide binding region. Lastly, we used MHC Class II α and Class II β to differentiate two separate sets of morphotypes living in sympatry in Lake Kiryalta in Russia and Gander Lake in Canada. The morphotypes in Gander Lake were successfully differentiated using both MH Class II α and β allele data, while the morphotypes in Lake Kiryalta were separated only with the MH Class II β allele data. Given that the use of one or more MH genes used allowed us to differentiate the populations studied, MH genes seem to be extremely useful as population markers for Arctic charr. Since MH genes not only characterize populations according to their phylogenetic relationships, but also according to their specific adaptation to inhabited niches, we concluded that all the Arctic charr populations studied are independent evolutionary significant units of the Arctic charr species. The conclusion implies that although different stocks might be living in sympatry, they should be considered as separate species for fishery and other management purposes, because their specific adaptations to the pathogens in their ecological niche might not allow them to cross-repopulate the other stock if it were removed by over-fishing or other anthropogenic stresses.