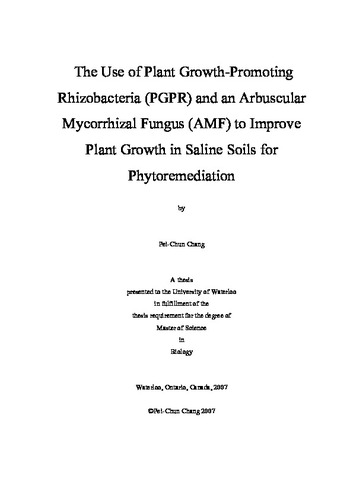 Upstream oil and gas production has caused soil salinity problems across western Canada. In this work we investigated the use of ACC (1-aminocyclopropane-1-carboxylate) deaminase-producing plant growth-promoting rhizobacteria (PGPR) and the arbuscular mycorrhizal fungus (AMF) Glomus intraradices to enhance the efficiency and feasibility of phytoremediation of saline soils. This work involved laboratory and field research for three sites in south east Saskatchewan, Canada. The three research sites were Cannington Manor South (CMS), Cannington Manor North (CMN) and Alameda (AL). CMS and AL were highly saline, while the CMN site had moderate salinity. Indigenous PGPR were isolated from these sites and tested in greenhouse experiments using authentic salt-contaminated soils taken from the research sites. Increased plant biomass by PGPR and/or AMF was observed. This growth promotion effect varied with plant species, soil salinity and soil fertility. The combination treatment of two previously isolated PGPR Pseudomonas putida UW3 and UW4 (noted as UW3+4) from farm soil in Ontario consistently promoted shoot growth of both barley and oats grown in saline soils by approximately 100%. The indigenous PGPR Pseudomonas corrugata (CMH3) and Acinetobacter haemolyticus (CMH2) also promoted plant growth on par with UW3+4. In addition, in one experiment where alfalfa was tested, UW3+4, CMH2 and CMH3 treatments not only enhanced shoot biomass but also increased root nodulation. For AMF effects, G. intraradices enhanced biomass of oats and barley. Furthermore, the AMF+CMH3 was effective in promoting growth of Topgun ryegrass, while AMF+CMH2 was beneficial for Inferno tall fescue growth in salt impacted soils. The concentration of NaCl in the plants grown in salt-impacted soils ranged from 24 – 83 g/kg. There was no evidence of an increase in NaCl concentrations of plant tissue by PGPR and/or AMF treatments. In addition, to determine the importance of nutrient addition to research sites, liquid fertilizer was applied to 2-week old plants. Results demonstrated that fertilizer effectively increased biomass, and more importantly the biomass of PGPR treated plants supplied with fertilizer was approximately 20% higher than that of plants treated with fertilizer alone. Therefore, research sites were then amended with compost before planting of the 2007 field trial. Plant growth promotion by UW3+4 and CMH3 was tested in the summer of 2007 in the field. Prior to planting, soils were sampled from each site for soil salinity analysis. Barley, oats, tall fescue and ryegrass treated with and without PGPR were sown in plots. The plant coverage condition, NaCl concentrations and biomass of plant shoots were assessed to evaluate the PGPR effect. The results showed that PGPR promoted shoot dry weight by 30% - 175%. The NaCl concentrations of barley, oats and tall fescue averaged 53 g/kg, 66 g/kg and 35 g/kg, respectively. There was no evidence of an increase in NaCl concentrations of plant tissue by PGPR in the field. The salt removal of the CMN site was the highest among three sites due to the large amount of shoot biomass produced. The amount of salt accumulated in the shoots on the CMN site is estimated to be 1580 kg per hectare per year when both barley and ryegrass are planted together as a mix and treated with PGPR. Based on the field data, the estimated time required to remove 50% salt in the top 50 cm soil is seven years with PGPR treatments, while it takes fifteen years to do so without PGPR. In conclusion, PGPR-promoted phytoremediation was proven to be a feasible and effective remediation technique for soils with moderate salinity.

Pei-Chun Chang (2008). The Use of Plant Growth-Promoting Rhizobacteria (PGPR) and an Arbuscular Mycorrhizal Fungus (AMF) to Improve Plant Growth in Saline Soils for Phytoremediation. UWSpace. http://hdl.handle.net/10012/3493