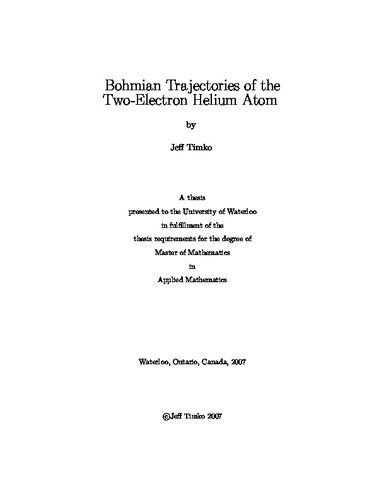 We introduce the de Broglie-Bohm causal interpreation of quantum mechanics and compare it to the standard interpretation of quantum mechanics, the Copenhagen interpretation. We examine the possibility of experimentally distinguishing between the two theories, as well as the potential for the causal interpretation to more easily bridge the gap between the physics of the quantum and classical worlds. We then use the causal interpretation to construct a deterministic model of the helium atom in which the two electrons move along trajectories through space and time about a stationary nucleus. The dynamics are governed by the non-relativistic Schrödinger equation and the spin vectors of both electrons are assumed to be constant along their respective trajectories. We examine the Bohmian trajectories associated with (approximations to) eigenstates of the helium Hamiltonian as well as the trajectories associated with some non-eigenstates. We also compute an approximation to the ground state energy of the helium atom using a representation of the helium wavefunction in terms of hydrogenic eigenfunctions which is motivated by a perturbation approach.