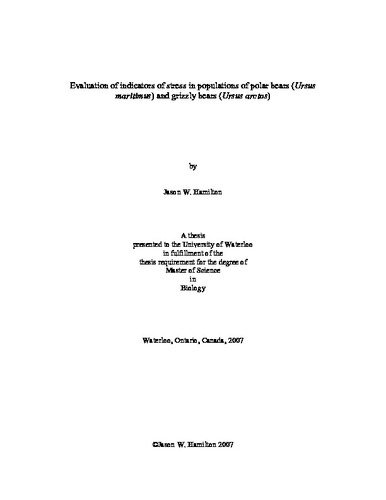 Grizzly and polar bears are both species at the top of the food chain in their respective ecosystems, and as such are indicative of the overall health of the ecosystem. Presently there is little data regarding the stress status of these animals. The development of reliable indicators of stress is important as both species face rapid environmental change. Polar bears from Hudson’s Bay (Ontario, Canada) and grizzly bears from Alberta, Canada, were anaesthetized and blood samples retrieved. Samples were assayed for changes in serum-based indicators of stress. Serum cortisol levels, the predominant corticosteroid in mammals and a commonly used indicator of stress, was measured to evaluate its potential as a chronic stress indicator in bears. The induction time of the cortisol response to stressor exposure is rapid and will be influenced by the stress relating to capture. Hence, serum levels of heat shock proteins (hsps), specifically the 60 (hsp60) and 70 kilodalton (hsp70) families of hsps were also measured to evaluate their reliability as a stress indicator in bears. Traditionally, heat shock proteins have been measured in tissues; however recent studies have indicated their presence in serum in response to chronic stress. In addition, the study examined the feasibility of using corticosteroid-binding globulin (CBG), a serum protein that binds cortisol, as a stress indicator in bears. CBG regulates the availability of cortisol to the tissues (only unbound cortisol elicits a response) but unlike cortisol is not rapidly regulated by acute stress. Bear CBG was isolated and a specific anti-bear CBG antibody was generated. The development of an enzyme-linked immunoadsorbant assay (ELISA) using this bear anti-CBG has the potential to be a useful tool to determine longer-term stress response in bears. Known life-history variables were correlated to the observed levels of serum indicators to elucidate which environmental factors impact bears. The length of sea ice coverage was the strongest determinant of serum cortisol and hsp70 levels in polar bears; the longer ice cover reflects more feeding time and this is reduced through climatic warming. This suggests that fasting associated metabolic changes may be impacting serum cortisol response and hsp70 levels in polar bears. For grizzly bears the proportion of protected homerange had the strongest correlation with stress indicators. This suggests that human impact on the environment, including resource extraction and landscape changes, result in altered levels of serum cortisol and hsp70 levels. Hsp60 was not observed to vary significantly in the face of changing environmental variables, and as such no correlation could be made between serum hsp60 levels and environmental variables in bears. Serum hsp70 was observed to change significantly in response to environmental variables in both polar and grizzly bears. These data along with the changes in cortisol and other health based indicators have the potential to make hsp70 a useful indicator of altered health status in bears. This study is the first attempt to integrate the usefulness of a suite of serum indicators of stress as a tool for detecting the health status of bears. The lack of a control group for comparison to wild population limits the utility of the observed variables as a tool to detect stressed states in bears. However, as these serum indicators are also modulated by the animals health life-history, including food limitation, the monitoring of these serum stress indicators, along with other indicators of fed and fasted states, may give a better picture of the health status of the animal related to nutrient availability.