Examination of the expression of the heat shock protein gene, hsp110, in Xenopus laevis cultured cells and embryos 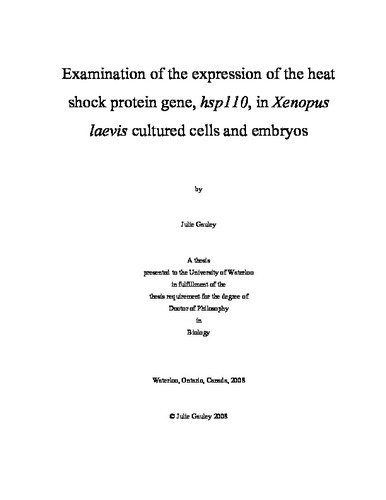 Prokaryotic and eukaryotic organisms respond to various stressors with the production of heat shock proteins (HSPs). HSP110 is a large molecular mass HSP that is constitutively expressed in most adult mammalian tissues. In the present study, we have examined for the first time the expression of the hsp110 gene in Xenopus laevis cultured cells and embryos. The Xenopus hsp110 cDNA encodes an 854 amino acid protein, which shares 74% identity with mice and humans. In Xenopus A6 kidney epithelial cells hsp110 mRNA was detected constitutively and was heat inducible. Enhanced hsp110 mRNA levels were detected within 1 h, and remained elevated for at least 6 h. A similar accumulation of hsp70 mRNA was observed, but only in response to stress. Treatment of A6 cells with sodium arsenite and cadmium chloride also induced hsp110 and hsp70 mRNA accumulation. However, while ethanol treatment resulted in the accumulation of hsp70 mRNA no effect was seen for hsp110. Similarly, HSP110 and HSP70 protein increased after a 2 h heat shock and 12 h sodium arsenite treatment. The elevation in HSP110 and HSP70 protein in response to heat was detectable for up to 6 h. Recent studies with mice suggest an important role for HSP110 during development. Analysis of Xenopus embryos revealed that hsp110 mRNA was present in unfertilized eggs, indicating that it is a maternal mRNA, unlike the hsp70 message which was only detectable in response to heat shock. Heat shock-induced hsp110 mRNA accumulation was developmentally regulated, similar to hsp70, since it was not detectable until after the midblastula stage of development. Enhanced hsp110 mRNA accumulation was evident with heat shock at the blastula stage, and levels continued to increase reaching a maximum at the late tailbud stage. Message for the small heat shock protein, hsp27, was not detectable until the early tailbud stage, indicating that this hsp was not present maternally and was developmentally regulated. In situ hybridization analysis revealed that hsp110 mRNA was present in control embryos in the lens placode, spinal cord and somites, but increased upon heat shock in the anterior and posterior region, the lens placode, as well as in the somites and spinal cord. A similar distribution was observed for the hsp27 message, although it was not detectable until the early tailbud stage in control or heat-shocked embryos. The intracellular localization of HSP110 protein in response to stress was also investigated. HSP110 was detected predominantly in the cytoplasm in either a diffuse pattern or in long spindle-shaped fibres. Additionally, HSP110 was present in the nucleus. In heat shocked Xenopus A6 cells, HSP110 localized in distinct patterns surrounding the nucleus and was enhanced in the nucleus after prolonged heat stress. Sodium arsenite-treated cells displayed a similar pattern in which HSP110 localized on opposite ends of the nucleus. In contrast, in response to stress HSP30 was homogeneously distributed in the cytoplasm, moving into the nucleus only upon intense stress. This study presents, for the first time, a characterization of HSP110 in Xenopus laevis, adding to the growing knowledge of HSPs in this important model organism.