The effect of galvanized steel corrosion on the integrity of concrete 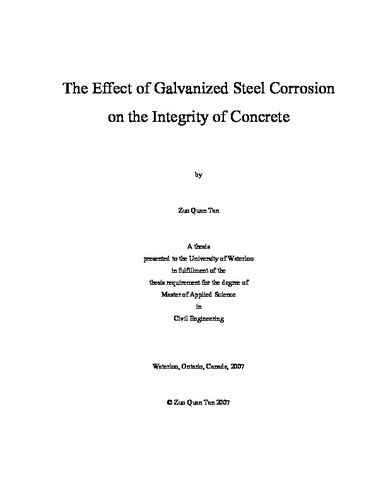 The major concern regarding the use of hot-dip galvanized (HDG) steel as reinforcement in concrete has been the high rate of corrosion experienced by the zinc during the first hours in the fresh, wet, and highly alkaline concrete. The present work was aimed at clarifying three issues associated with these concerns. The first involves the metallurgical phases at the surface of the zinc coating. The concentration of zinc at the surface is a function of processing procedures, surface treatment, and exposure to weathering. Differences in the coating surface composition influence the corrosion behaviour of HDG steel reinforcing bars when they are embedded in concrete. The second issue involves the increasing use of supplementary cementing materials in concrete, which change the chemistry of the concrete pore fluid, and also influence the corrosion. The third issue is that the initial corrosion is accompanied by hydrogen evolution, which could increase the pore volume of adjacent cement and thereby, decrease the bond stress between the concrete and the steel. In order to limit the hydrogen evolution, a chromate layer is applied after galvanizing. The results of the project have demonstrated that, during zinc corrosion in ordinary Portland cement (OPC) concrete, calcium hydroxyzincate formed on untreated HDG steel provided sufficient protection against corrosion. Therefore, it is concluded that treating HDG rebar with dilute chromic acid is unnecessary as a method of passivating zinc. A layer of zinc oxide and zinc carbonate formed through weathering on HDG bars slightly increased the initial corrosion rate and passivation time compared with the non-weathered rebars. HDG steel with an alloyed coating, i.e. consisting of Fe-Zn intermetallic phases, required a longer time to passivate than those with a pure zinc surface layer. The lower zinc content of the surface limited the rate of CHZ formation and, hence, delayed passivation. However, regardless of the surface condition, the coating depth loss after two days of embedment in OPC concrete was insignificant. In concretes containing 8% cement replacement with silica fume, or 25% cement replacement with slag, the initial corrosion rates were higher than those in OPC due to higher pH and lower calcium contents of the concrete pore solution. The higher corrosion rates lead to initial depth losses which are considered significant. However, in these concretes, chromate treatment was also shown to be unnecessary. Through porosity assessment of cements adjacent to HDG bars, it was found that hydrogen evolution accompanying zinc corrosion did not have an impact on the pore volume of cements: any additional pores created by hydrogen gas are filled by the zinc corrosion products. The negligible difference in pore volume between cements adjacent to chromated and non-chromated bars further confirmed that chromated treatment was unnecessary.