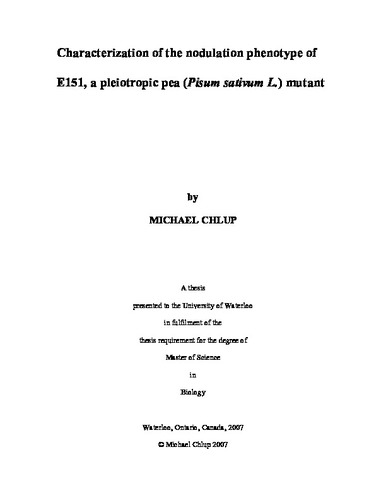 E151 (sym15) is characterized as a pleiotropic pea (Pisum sativum L.) mutant. It has been described as having short lateral roots, a short primary root, and a shorter epicotyl than that of the wild type Sparkle. Furthermore, after 4 weeks of growth it was described as a low nodulator since nodulation was rare (Kneen et al., 1994). My main objective is to further characterize the nodulation phenotype of this mutant. Inoculated of the mutant with two separate strains of Rhizobium leguminosarum biovar viciae caused E151 to develop more nodules when infected with 8401 (lacZ) than with 128C53K. These results suggest that E151 exhibits different levels of susceptibility to infection with different strains. Nodule organogenesis was studied by inoculating E151 with a rhizobial strain that constitutively produces ß-galactosidase and then staining cleared whole root sections with the X-Gal substrate. The substrate produced a blue colour and allowed the rhizobial path to be visualized. It was found that nodule organogenesis in the mutant line is delayed at stage C (i.e., IT associated with cortical cell division) and eventually mature nodules form. The rates of N2 fixation (µmol N2/hr)/nodule dry weight (g) were found to be similar between Sparkle and E151 at 14, 21, and 28 days after inoculation. When comparing the nodulation defect of E151 to other pea mutants summarized by Guinel and Geil (2002), it appears that the nodulation phenotype of E151 is unique.