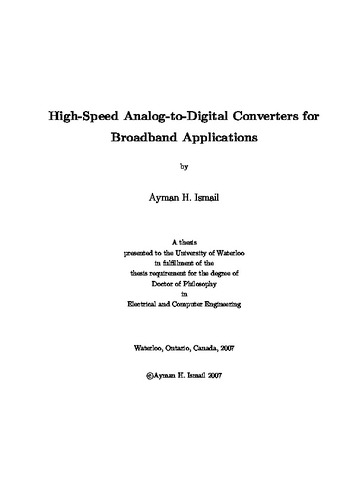 Flash Analog-to-Digital Converters (ADCs), targeting optical communication standards, have been reported in SiGe BiCMOS technology. CMOS implementation of such designs faces two challenges. The first is to achieve a high sampling speed, given the lower gain-bandwidth (lower ft) of CMOS technology. The second challenge is to handle the wide bandwidth of the input signal with a certain accuracy. Although the first problem can be relaxed by using the time-interleaved architecture, the second problem remains as a main obstacle to CMOS implementation. As a result, the feasibility of the CMOS implementation of ADCs for such applications, or other wide band applications, depends primarily on achieving a very small input capacitance (large bandwidth) at the desired accuracy. In the flash architecture, the input capacitance is traded off for the achievable accuracy. This tradeoff becomes tighter with technology scaling. An effective way to ease this tradeoff is to use resistive offset averaging. This permits the use of smaller area transistors, leading to a reduction in the ADC input capacitance. In addition, interpolation can be used to decrease the input capacitance of flash ADCs. In an interpolating architecture, the number of ADC input preamplifiers is reduced significantly, and a resistor network interpolates the missing zero-crossings needed for an N-bit conversion. The resistive network also averages out the preamplifiers offsets. Consequently, an interpolating network works also as an averaging network. The resistor network used for averaging or interpolation causes a systematic non-linearity at the ADC transfer characteristics edges. The common solution to this problem is to extend the preamplifiers array beyond the input signal voltage range by using dummy preamplifiers. However, this demands a corresponding extension of the flash ADC reference-voltage resistor ladder. Since the voltage headroom of the reference ladder is considered to be a main bottleneck in the implementation of flash ADCs in deep-submicron technologies with reduced supply voltage, extending the reference voltage beyond the input voltage range is highly undesirable. The principal objective of this thesis is to develop a new circuit technique to enhance the bandwidth-accuracy product of flash ADCs. Thus, first, a rigorous analysis of flash ADC architectures accuracy-bandwidth tradeoff is presented. It is demonstrated that the interpolating architecture achieves a superior accuracy compared to that of a full flash architecture for the same input capacitance, and hence would lead to a higher bandwidth-accuracy product, especially in deep-submicron technologies that use low power supplies. Also, the gain obtained, when interpolation is employed, is quantified. In addition, the limitations of a previous claim, which suggests that an interpolating architecture is equivalent to an averaging full flash architecture that trades off accuracy for the input capacitance, is presented. Secondly, a termination technique for the averaging/interpolation network of flash ADC preamplifiers is devised. The proposed technique maintains the linearity of the ADC at the transfer characteristics edges and cancels out the over-range voltage, consumed by the dummy preamplifiers. This makes flash ADCs more amenable for integration in deep-submicron CMOS technologies. In addition, the elimination of this over-range voltage allows a larger least-significant bit. As a result, a higher input referred offset is tolerated, and a significant reductions in the ADC input capacitance and power dissipation are achieved at the same accuracy. Unlike a previous solution, the proposed technique does not introduce negative transconductance at flash ADC preamplifiers array edges. As a result, the offset averaging technique can be used efficiently. To prove the resulting saving in the ADC input capacitance and power dissipation that is attained by the proposed termination technique, a 6-bit 1.6-GS/s flash ADC test chip is designed and implemented in 0.13-$\mu$m CMOS technology. The ADC consumes 180 mW from a 1.5-V supply and achieves a Signal-to-Noise-plus-Distortion Ratio (SNDR) of 34.5 dB and 30 dB at 50-MHz and 1450-MHz input signal frequency, respectively. The measured peak Integral-Non-Linearity (INL) and Differential-Non-Linearity (DNL) are 0.42 LSB and 0.49 LSB, respectively.