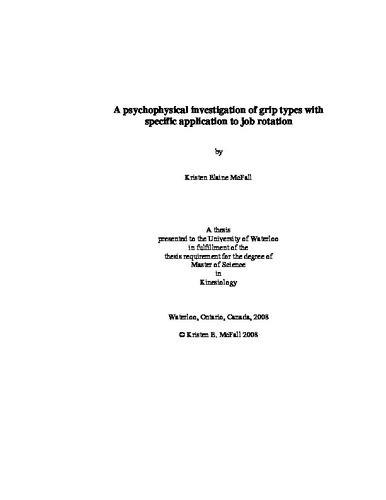 Job rotation is recommended to prevent musculoskeletal disorders (MSD). The premise is by involving different tissues a “working rest” for other tissues is created. The possible health benefits from this relief have not been investigated with regards to different grips in hand intensive jobs. The purpose of this study is to investigate hand intensive tasks and determine whether rotating between the power grip and lateral pinch grip can provide a benefit. A psychophysical load adjustment protocol was used. To investigate the effect of rotation, three different trials were collected. These included: power grip only, lateral pinch only, and alternating the two grips. Each trial was 60 minutes in duration, with a 12second cycle time, and 25% duty cycle. Fourteen subjects were recruited and pre-screened for any upper extremity disorders. Subjects were instructed to “work as hard as you can without straining your hand, wrist or forearm”; by adjusting their resistance settings to achieve a maximum acceptable force (MAF). Grip forces were exerted on an adjustable system using a hand grip dynamometer. Ratings of perceived discomfort were reported every 10minutes. Electromyography (EMG) was collected on eight forearm muscles during the combination trial. The demand for both lateral pinch and power grip tasks were at self selected levels and no fatigue was reported within MAF, EMG recordings, and discomfort reports. The rotation between lateral pinch and power grip had no apparent effect on MAF. However, EMG data hinted that there was a rotation of activation between first dorsal interossei and the forearm flexors (not statistically significant). Less discomfort was reported within the combination trial than the single grip (not significant). The study found no measurable difference in MAF when rotating between the power grip and lateral pinch. Considering there was no increase in demand, there is potential benefit to rotation, with trends to rotating activation between muscles, less discomfort being reported, and a general preference for the rotation. Given the high rates of MSD, and rotation being an effective tool to lower exposure, further investigations are required to understand relationships between similar muscles groups within hand intensive work environments.