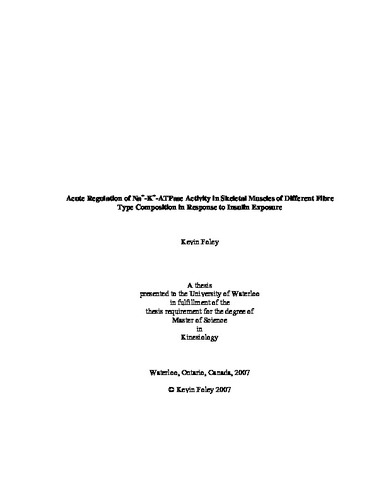 The Na+-K+-ATPase (pump) is a transmembrane, multi-subunit (α and β) protein that is expressed in all cells, and particularly in skeletal muscle cells. In one cycle, it pumps 3 Na+ ions out of the cell and 2 K+ ions into the cell at the expense of 1 ATP molecule. This enzyme is responsible for maintaining muscle cell excitability. This is of particular importance during contractile activity, when the flux of Na+ and K+ across the cell membrane is high. The activity of the Na+-K+-ATPase is highly regulated and very responsive to hormonal stimuli. Previous research has shown that 20-30 min insulin exposure in vivo induces the translocation of pumps from intracellular stores to the plasma membrane. However, no study has examined the catalytic properties of this enzyme in response to short insulin exposures. The objective of this study was to investigate the response of the Na+-K+-ATPase to short insulin incubation in vitro in muscles of different fibre type. It was hypothesized that the short insulin treatment would result in an increase in pump activity, not only through translocation but also increased intrinsic activity. Using an in vitro model, rat soleus (Sol), red gastrocnemius (RG), and white gastrocnemius (WG) muscle homogenates were incubated at 37°C for 5 min with and without 75μM insulin (Ins). Next, in order to separate mechanisms of translocation and intrinsic activation, the plasma (SLP) and endosomal (EN) membranes were separated through a fractionation procedure. This allowed the investigation of insulin-induced increases in intrinsic activity in SLP and EN fractions of Na+-K+-ATPase; SLP and EN (non-treated) membranes were incubated at 37°C for 5 min with and without 75μM insulin. Lastly, muscle homogenates were insulin-treated for 5 min at 37°C with 625μM insulin prior to fractionation. These SLP and EN fractions (insulin-treated) were then incubated at 37°C for 5 min with and without 75μM insulin. Na+-K+-ATPase maximal activity (Vmax, mmol•mg prot-1•h-1) and km (substrate affinity), α2 content, and tyrosine phosphorylation (Tyr-P) were probed. It was found that insulin increased Vmax (P<0.05) in Sol and RG, but not WG, homogenates (Con vs Ins, Sol=221±17 vs 256±21; RG=190±14 vs 256±18; WG=104±4.6 vs 99±1.8). In non-treated fractions, insulin increased Vmax (P<0.05) in Sol and RG SLP fractions (Con vs Ins, Sol=1710±186 vs 1970±231; RG=1476±128 vs 1655±139). A main effect, Con<Ins (P<0.05) was observed in non-treated WG SLP. Insulin also increased Vmax in non-treated RG EN (Con vs Ins, 246±38 vs 304±43). In insulin-treated fractions, insulin increased Vmax¬ in RG SLP only (Con vs Ins, 1145±119 vs 1426±150). Increased Vmax was not observed in insulin-treated fractions when compared to non-treated fractions. No evidence of translocation or increased Tyr-P was detected with insulin treatment via α2 Western blotting. Short insulin exposure induced increases in Na+-K+-ATPase activity, and these increases were due to stimulation of intrinsic activity and not due to translocation.