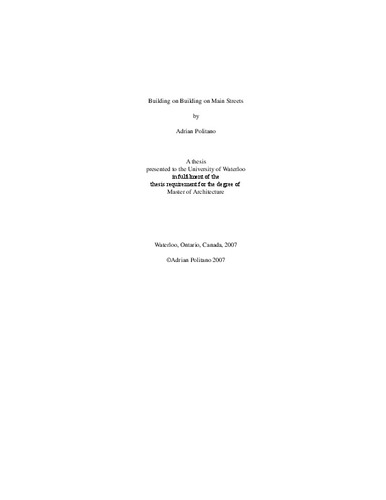 This thesis examines the problems of building on Toronto’s main streets. These arterial mixed-use corridors that define much of the public face of the city are the subject of ongoing residential intensification efforts through the Official Plan policies of the City of Toronto. The form that this new development takes can either reinforce and improve existing streetscapes and housing stock, or it might –as is already happening– replace the long-established vital urban patterns of main streets with very different, less versatile, and less diverse building forms with a diminished standard of both urban and interior living space. Part I considers main streets at the urban scale, while Part II is a discussion of housing quality and architectural aims that informs a series of proposed prototypical building designs to be located on a site on Queen Street West as an example of site conditions found on main streets in a variety of locations throughout the city. To understand the urban implications of main street building, this study looks at the specific historical factors that have shaped Toronto’s main streets, and looks at why they continue to have value and have become a focus for intensification today. It revisits key episodes in Toronto’s redevelopment planning over the last four decades, particularly the St. Lawrence Neighborhood Plan, the Ataratiri Plan, and the Housing on Toronto’s Main Streets Initiative. The precedent historical research points to the need for small increments of development on main streets in order to maintain the economic, social, and visual diversity that have made them such a vital and dynamic component of the city in the past. This scale of development calls for new building types to respond to the very particular site conditions of main streets. Modern building types that are typically used in these situations are ill suited to respond to these conditions, provide a limited range of unit types, and are leading to compromises of urban and interior spatial quality when applied to these sites. The architectural discussion centers on the observation that traditional main street lot patterns, despite inherent rigidity and rationality, have nonetheless proven to be a functionally flexible urban structure that has accommodated and encouraged a remarkable diversity of uses, architectural forms, and individual interpretations over time. Comparable complexity and diversity of spatial qualities can be found in a variety of architectural design approaches, including those of Adolf Loos’ ‘Raumplan’, Rudolf Schindler’s ‘Space Architecture’, or Herman Hertzberger’s concept of ‘Polyvalent Form’. The spaces created by these architects are an architectural analogue of the dynamic, richly varied urban characteristics of Toronto’s existing main streets. Both create the opportunities for individual expression and continually varied spatial experience that better reflects the complexity of both urban and domestic life. These precedents of architectural form -imbued with qualities of multiplicity, heterogeneity and reinterpretability- propose a counterpoint to the standard of functionally rigid, spatially limited and typologically predictable buildings and living spaces currently available. The proposed building designs are intended to widen the options for dwelling within the city, while offering an update and intensification of main streets that reinforces rather than replaces desirable existing urban patterns.