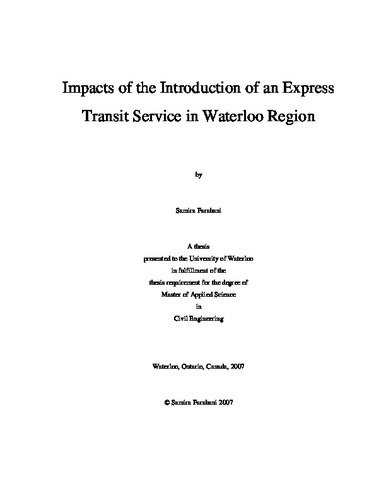 For more than a century, public transportation has played a significant role in society. Transit agencies, like other service industries, are intent on improving their quality of service so as to increase transit ridership and attract passengers from other modes. In recent years transportation technologies have been improved which increase safety, mobility for people and goods, and reduce Green House Gas (GHG) emissions. An evaluation of the impacts of these operational and technological advancements is required for transit agencies to capture the potential benefits for their systems. The Region Municipality of Waterloo (RMOW), a mid-size region in Ontario has implemented an express transit service (iXpress) in Sept, 2005. The service has longer distances between stops and incorporates advanced technologies. The goal is to increase transit ridership and, as a result, to reduce GHG emissions. This research has been conducted to study the iXpress service and to develop several methods to determine the impacts of high speed transit service on passenger attraction, operational efficiency, and regional air quality. In this research, the change in total cost of travel between origin destination pairs is correlated to changes in observed ridership. Further, several surveys were conducted in the RMOW to evaluate the travel pattern changes of residents who switched from other modes to iXpress. Based on fuel consumption data, a model of GHG emissions as a function of route and vehicle characteristics has been developed to capture the operational impacts of a new iXpress service. The iXpress service of Grand River Transit (GRT) has been successful in attracting riders despite delays in technology implementation. The cost analysis presented in this research shows that the introduction of iXpress resulted in approximately 30% reduction in overall cost of travel by transit. As a result, ridership (boardings) has increased by 11% and 46% in the northern and southern sections of the iXpress service area respectively, while accounting for overall growth in the system. An analysis of travel patterns and mode shifts suggest that travelers switching from auto mode to iXpress have resulted in annualized reduction of approximately 530 tonnes of GHG. A fuel consumption analysis indicates that buses on the iXpress route have an average fuel consumption rate of 0.54 L/km while, buses serving local route consumes fuel of a rate of 0.62 L/km.

Samira Farahani (2008). Impacts of the Introduction of an Express Transit Service in Waterloo Region. UWSpace. http://hdl.handle.net/10012/3469