Effect of ethanol on BTEX biodegradation in aerobic aquifer systems 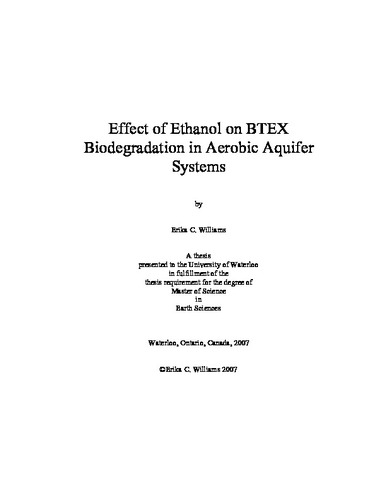 Ethanol can affect the biodegradation of gasoline hydrocarbons in groundwater. High concentrations of ethanol can be toxic to subsurface microorganisms that are otherwise capable of degrading hydrocarbons, such as benzene, toluene, ethylbenzene and xylenes (BTEX). At lower concentrations, ethanol may hinder BTEX degradation through substrate competition and the depletion of inorganic nutrients (e.g., nitrogen and phosphorus), oxygen and other electron acceptors needed for BTEX degradation. A series of laboratory experiments were designed to study the effect of ethanol on aquifer microorganisms and on aerobic BTEX biodegradation. A microcosm experiment was conducted to investigate the effect of ethanol on the biodegradation of BTEX. Microcosms were set up with Borden aquifer material and groundwater in which oxygen and nutrients were not limited. These microcosms contained BTEX in combination with a range of ethanol concentrations. Under these favourable conditions, the presence of ethanol up to concentrations of 1.9% (v/v) (equivalent to 15000 mg/L) caused little inhibition of BTEX degradation. Further experiments were conducted to study the antimicrobial effects of higher concentrations of ethanol. Following exposure to ethanol concentrations of 25% (v/v) or higher, microbial activity and survival was significantly diminished. Results suggest that a high concentration ethanol slug will have a major impact on the microbial community but that there would likely be potential for recovery. The recovery potential was examined further in laboratory column experiments designed to simulate a dynamic field situation where a high ethanol pulse is followed by a BTEX plume. These column experiments were conducted with Borden aquifer material and groundwater under aerobic conditions. The concentration of the ethanol pulse was 25% (v/v), which was expected to significantly alter the microbial population without destroying it. Following the ethanol exposure, groundwater and BTEX were allowed to flow through one column to simulate the reinoculation of microorganisms from upgradient groundwater advecting into the contaminated zone. The other column was fed with sterile groundwater and BTEX to evaluate the regeneration of within-column microorganisms that survived the ethanol exposure. Recovery in both columns was rapid. Unfortunately, during the recovery phase, sterility of the influent groundwater could not be maintained. As a result, recovery by regeneration could not be evaluated. Nonetheless, it is evident that recovery in terms of aerobic BTEX biodegradation was significant under the conditions of the column experiment. Ethanol did not appear to pose a long-term impact on BTEX biodegradation when oxygen and nutrients were in excess. In field situations, nutrients and electron acceptors may be limited; however, ethanol toxicity is not likely to cause a prolonged inhibition of BTEX biodegradation.