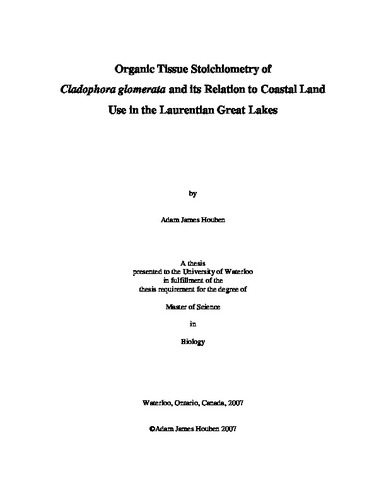 The relationships between C:N:P (carbon, nitrogen, and phosphorus) stoichiometry of Cladophora glomerata and land use characteristics in selected nearshore areas of the lower Laurentian Great Lakes were determined during two years of field sampling of coastal areas. In the past, bi-national reduction of point sources of P-loading resulted in reduced C. glomerata biomass; however, currently C. glomerata is resurging and it has been suggested that non-point source P loading, which may have increased with increasing populations and coastal land use changes, may be the cause. Study of the Halton shoreline, Lake Ontario, in 2006 demonstrated that C. glomerata nutrient stoichiometry has a strong seasonal relationship as internal P concentrations at 2 and 5 m depths decline to as low as 0.5 μg/mg dw during the rapid early summer growth period, well below the literature value of 1.6 μg/mg dw indicative of P limitation. Samples at 10 m maintained a constant surplus in P throughout the summer as light was the greater controlling factor at this depth. Along with ambient dissolved P, C. glomerata internal P increased sharply during the September and October surveys to approximately 3.5 μg P/mg dw at 2 m stations. Throughout the 2006 growing season both water chemistry and C. glomerata nutrient stoichiometry did not identify any direct point source influencing algal growth as indicated by tissue stoichiometry. Land use comparisons between the urbanized Halton region and the non urban sites of Presqu’ile Provincial Park and Peacock Point (Lakes Ontario and Erie, respectively) indicated significantly higher enrichment in both nitrogen and phosphorus at the 10 m urban stations as internal P concentrations were elevated and both N and P nutritional status indicators (C/P, C/N, and N/P) were much lower compared with non-urban sites. Areas with relatively more human impact (Port Credit and Halton on Lake Ontario) had higher internal P concentrations in C. glomerata. Through empirical evidence, nutrient status ratios predict the onset of P limitation for Cladophora glomerata within the Great Lakes to have values for C:P > 505 and N:P > 41, whereas zero positive growth was estimated to begin when C:P > 1246 and N:P > 75. Natural stable isotope abundances of 13C were indicative of benthic algal production as δ13C values from C. glomerata tissue samples during the early summer rapid growth period varied with depth to the 5 m depth contour. Though, overall 13C algal signals were a function of offshore changes in DIC-δ13C patterns throughout the year they were consistently lower in Cladophora tissue at shallower depths suggesting high photosynthetic demand for CO2 reduced isotopic photosynthetic fractionation. This trend was evident along most shorelines and from year to year, verifying the use of 13C stable isotope to define periods of potentially carbon-limited production. 13C and 15N did not identify any significant difference between urban and non urban shorelines. Similarly, stable isotopes were inconclusive in measuring local point source impacts. Similarly, point sources were also not apparent from measuring water chemistry and C. glomerata tissue parameters. The use of 15N isotopes in tracing C. glomerata filament origins may be of merit as persistent depth relationships were observed at all sites in Lake Erie and Ontario.

Adam James Houben (2008). Organic Tissue Stoichiometry of Cladophora glomerata and its Relation to Coastal Land Use in the Laurentian Great Lakes. UWSpace. http://hdl.handle.net/10012/3462