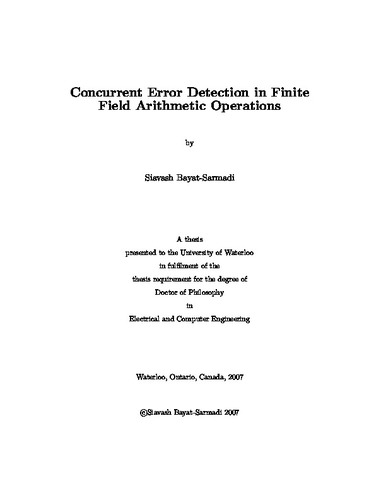 With significant advances in wired and wireless technologies and also increased shrinking in the size of VLSI circuits, many devices have become very large because they need to contain several large units. This large number of gates and in turn large number of transistors causes the devices to be more prone to faults. These faults specially in sensitive and critical applications may cause serious failures and hence should be avoided. On the other hand, some critical applications such as cryptosystems may also be prone to deliberately injected faults by malicious attackers. Some of these faults can produce erroneous results that can reveal some important secret information of the cryptosystems. Furthermore, yield factor improvement is always an important issue in VLSI design and fabrication processes. Digital systems such as cryptosystems and digital signal processors usually contain finite field operations. Therefore, error detection and correction of such operations have become an important issue recently. In most of the work reported so far, error detection and correction are applied using redundancies in space (hardware), time, and/or information (coding theory). In this work, schemes based on these redundancies are presented to detect errors in important finite field arithmetic operations resulting from hardware faults. Finite fields are used in a number of practical cryptosystems and channel encoders/decoders. The schemes presented here can detect errors in arithmetic operations of finite fields represented in different bases, including polynomial, dual and/or normal basis, and implemented in various architectures, including bit-serial, bit-parallel and/or systolic arrays.