Communication over Channels with Causal Side Information at the Transmitter 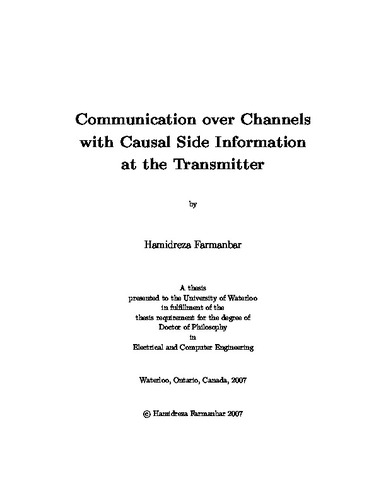 This work deals with communication over the AWGN channel with additive discrete interference, where the sequence of interference symbols is known causally at the transmitter. We use Shannon's treatment for channels with side information at the transmitter as a framework to derive ``optimal precoding" and ``channel code design criterion" for the channel with known interference at the transmitter. Communication over Shannon's state-dependent discrete memoryless channel where the state sequence is known causally at the transmitter requires encoding over the so-called \emph{associated} channel which has exponential input alphabet cardinality with respect to the number of states. We show that by using at most linearly many input symbols of the \emph{associated} channel, the capacity is achievable. In particular, we consider $M$-ary signal transmission over the AWGN channel with additive $Q$-ary interference where the sequence of i.i.d. interference symbols is known causally at the transmitter. We investigate the problem of maximization of the transmission rate under the uniformity constraint, where the channel input given any current interference symbol is uniformly distributed over the channel input alphabet. For this setting, we propose the general structure of a communication system with optimal precoding. We also investigate the extension of the proposed precoding scheme to continuous channel input alphabet. We also consider the problem of channel code design with causal side information at the encoder. We derive the code design criterion at high SNR by defining a new distance measure between the input symbols of the Shannon's \emph{associated} channel. For the case of the binary-input channel, i.e., $M=2$, we show that it is sufficient to use only two (out of $2^Q$) input symbols of the \emph{associated} channel in encoding as far as the distance spectrum of code is concerned. This reduces the problem of channel code design for the binary-input AWGN channel with known interference at the encoder to design of binary codes for the binary symmetric channel where the Hamming distance among codewords is the major factor in the performance of the code.

Hamidreza Farmanbar (2007). Communication over Channels with Causal Side Information at the Transmitter. UWSpace. http://hdl.handle.net/10012/3458