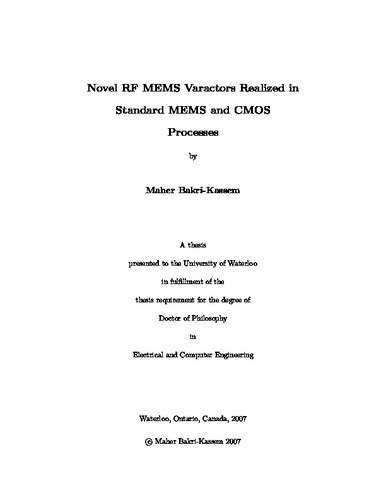 Micro-Electro-Mechanical Systems (MEMS) varactors have the potential to replace conventional varactor diodes, due to their high loss and non-linearity, in many applications such as phase shifters, oscillators, and tunable filters. The objective of this thesis is to develop novel MEMS varactors to improve the capacitance tuning ratio, linearity, and quality factor. Several novel varactor configurations are developed, analyzed, fabricated and tested. They are built by using standard MEMS fabrication processes, as well as monolithic integration techniques in CMOS technology. The first capacitor consists of two movable plates, loaded with a nitride layer that exhibits an analog continuous capacitance tuning ratio. To decrease the the parasitic capacitance, a trench in the silicon substrate under the capacitor is adopted. The use of an insulation dielectric layer on the bottom plate of the MEMS capacitor increases the capacitors’ tuning ratio. Experimental and theoretical results are presented for two versions of the proposed capacitor with different capacitance values. The measured capacitance tuning ratio is 280% at 1 GHz. The proposed MEMS vararctor is built using the MetalMUMPs process. The second, third, and fourth capacitors have additional beams that are called carrier beams. The use of the carrier beams makes it possible to obtain an equivalent nonlinear spring constant, which increases the capacitors’ analog continuous tuning ratio. A lumped element model and a continuous model of the proposed variable capacitors are developed. The continuous model is simulated by commercial software. A detailed analysis for the steady state of the capacitors is presented. The measured capacitance tuning ratios of these three capacitors are 410%, 400% and 470%, respectively at 1 GHz. Also, the selfresonance frequency is measured and found to exceed 11 GHz. The proposed MEMS variable capacitors are built by the PolyMUMPs process. The fifth novel parallel-plate MEMS varactor has thin-film vertical comb actuators as its driver. Such an actuator can vertically displace both plates of the parallel-plate capacitor. By making use of the fringing field, this actuator exhibits linear displacement behavior, caused by the induced electrostatic force of the actuator’s electrodes. The proposed capacitor has a low parasitic capacitance and linear deflection due to the mechanically connected and electrically isolated actuators to the capacitor’s parallel-plates. The measured tuning capacitance ratio is 7:1 (600%) at 1 GHz. The fabricated MEMS varactor exhibits a self resonance frequency of 9 GHz and built by MetalMUMPs process. The sixth parallel-plate MEMS varactor exhibits a linear response and high tuning capacitance ratio. The capacitor employs the residual stress of the chosen bi-layer, and the non-linear spring constants from the suspended cantilevers to obtain a non-linear restoring force that compensates for the nonlinear electrostatic force induced between the top and bottom plates. Two existing techniques are used to widen the tuning range of the proposed capacitor. The first technique is to decrease the parasitic capacitance by etching the lossy substrate under the capacitor’s plates. The second technique is employed to increase the capacitance density, where the areas between the top and bottom plates overlap, by applying a thin film of dielectric material, deposited by the atomic layer deposition (ALD) technique. The measured linear continuous tuning ratio for the proposed capacitor, built in the PolyMUMPs process, is 5:1 (400%). The seventh and eighth MEMS variable capacitors have plates that curl up. These capacitors are built in 0.35 μm CMOS technology from the interconnect metallization layers. The plates of the presented capacitors are intentionally curled upward to control the tuning performance. A newly developed maskless post-processing technique that is appropriate for MEMS/CMOS circuits is proposed. it consists of dry and wet etching steps, developed to integrate the proposed MEMS varactors in CMOS technology. Mechanically, the capacitors are simulated by the finite element method in ANSYS, and the results are compared with the measured results. The seventh capacitor is a tri-state structure that exhibits a measured tuning range of 460% at 1 GHz with a flat capacitance response that is superior to that of conventional digital capacitors. The proposed capacitor is simulated in HFSS and the extracted capacitance is compared with the measured capacitance over a frequency range of 1 GHz to 5 GHz. The eighth capacitor is an analog continuous structure that demonstrates a measured continuous tuning range of 115% at 1 GHz with no pull-in. The measured quality factor for both CMOSbased capacitors is more than 300 at 1.5 GHz. The proposed curled-plate capacitors have a small area and can be realized to build a System-on-Chip (SoC). Finally, a tunable band pass filter that utilizes the MEMS variable capacitors in 0.18 μm CMOS technology from TSMC is designed, modeled and fabricated.